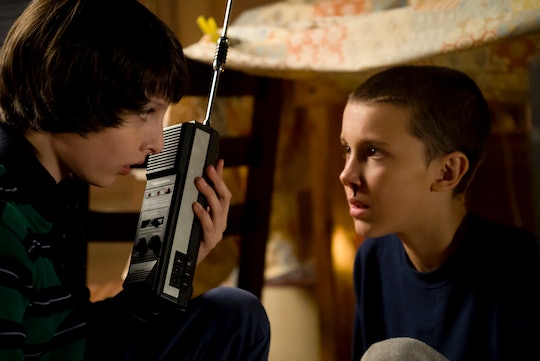 Who Is Eleven On 'Stranger Things'? The Mysterious Young Girl Has Plenty Of Secrets

(Warning: This post contains spoilers from Episode 3 of Stranger Things.) The eerie, mysterious vibe of the newest Netflix original series Stranger Things is apparent right off the bat. The season premiere, set in the small town of Hawkins, Indiana in 1983, features a terrifying sequence in which a young boy named Will inexplicably vanishes into thin air, after being pursued by an otherworldly creature. Will's disappearance, and the efforts of his friends, family, and Hawkins' local law enforcement to find him, form the central mystery of the season. But the question of what happened to Will isn't the only mystery at work. The appearance of an unusual girl bearing an "11" marking coincides with Will's vanishing – but who is Eleven on Stranger Things?

The introduction of the near-mute little girl is one of the most intriguing scenes of the premiere. She appears in Benny's Diner, barefoot, bedraggled, and wearing only a hospital gown, after having escaped the mysterious "Department of Energy." She steals food from the kitchen, only to be chased down by Benny. The diner proprietor is kind to the strange girl and feeds her, but later winds up shot in the head for his troubles, when agents from the ominous Department show up to collect her in place of social services. Luckily, Eleven escapes the "bad men" who are after her.

Eleven, nicknamed El by Mike (one of the boys who finds her wandering the woods after her escape), remains an enigmatic character throughout the next few episodes. But we do have a few clues about who (or what) she might be.

She Has An Unusual Appearance

Eleven has a shaved head and was presumably kept in a hospital gown for a long period of time, based on how disheveled and dirty the gown was. Her most significant physical attribute is a small tattoo on her arm that reads "11." It's unclear whether the tattoo is a brand or something else.

There's no doubt about it – El has supernatural powers. At the very least, she is telekinetic. While Benny calls social services in the premiere, El uses her mind to stop his fan from blowing. In Episode 2, when Lucas attempts to tell Mike's mom about El, she stops him by telekinetically keeping the door shut.

The origin and nature of her powers remain obscure. Is she human? Is she an alien?

Stranger Things is not exactly subtle about being an homage to classic Spielberg films of the '80s. There are certainly plenty of parallels to Spielberg's classic alien E.T. in El's character. Though she's not alien-like in appearance, she shares E.T.'s power of telepathy, minimal understanding of the English language, and fascination with common household objects. She could totally be an alien.

On the other hand, she seems to have been kept in a facility and experimented on for most of her life. In Episode 3, El repeatedly has flashbacks to her time at the "Department of Energy," where she was forced to endure psychological testing in order to harness her telekinetic powers. Eventually, she even manages to use her powers to kill two of the Department's workers. She might just be an "altered" or supernaturally-inclined human child.

She's "Connected" To Will

While Winona Ryder's Joyce slowly unravels and tries to communicate with her son via lamps, El seems all too aware of exactly what is happening with Will.

In Episode 2, El informs Will's friends (who are harboring her) that Will is "hiding" from a monster, setting them off on a quest to recover him. How she knows where Will is or what's pursuing him remains to be seen, though it seems probable that the possible-interdimensional creature who abducted Will might have escaped from the same facility where El was kept. The season premiere opens with a Department of Energy scientist fleeing from the same beast.

El's true nature remains to be seen. For now, she's just a mysterious little girl with shorn hair, an "11" tattoo, and telekinetic powers – though she's almost certainly much more than that.