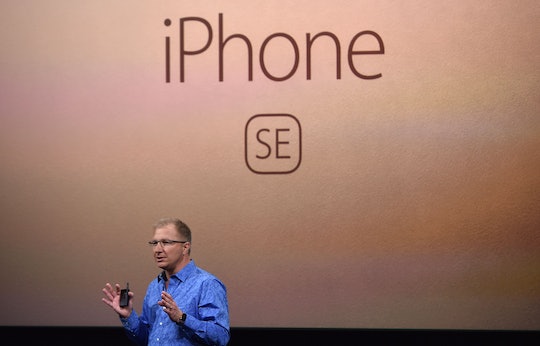 Who Is Eligible To Upgrade To The iPhone SE? It's Made For People Who Like Smaller Phones

Apple just announced the release of the iPhone SE, a 4-inch iPhone meant to fill the market gap for smaller, lower-priced phones and boost lagging sales for the company. The Cupertino, California, giant is hoping the phone, smaller than the iPhone 6s and iPhone 6s Plus, and about the same size as the iPhone 5s. But the smaller iPhone SE will have a killer camera and most of the technology in the iPhone 6s, just in a smaller size. So who is eligible to upgrade to the iPhone SE? Apple is hoping everyone will get the new phone and take it to their carrier and get connected.

Apple's Tim Cook announced at the beginning of the the year that, for the first time in history, iPhone sales are declining. Consumers just aren't replacing their iPhones as frequently as they have in the past. So, the iPhone SE, with it's $399 starter price tag, could entice customers to upgrade.

Apple will start taking orders for the iPhone SE on March 24, and the phone will go on sale March 31. Apple will extend sales of the iPhone SE to more than 100 countries by the end of May 2016.

If you're the type who likes to make sure you've got the newest iPhone at all times, you can consider the Apple iPhone Upgrade Program, which charges a monthly fee and upgrades you to the newest iPhone every year. Once you've purchased a phone from Apple, just take it to your mobile service provider to get it set up on the network. Each carrier has their own terms and choices of devices for upgrades. AT&T has upgrade options including AT&T Next, an installment plan that let's you pay a monthly fee and get an annual device upgrade similar to Apple's program. Verizon allows you to upgrade a device based on your contract, but will allow you to bring any compatible device from a third party, like Apple. T-Mobile offers Jump! On Demand upgrade program. Most carriers have similar terms, but will always add a new device to your account for little or no charge.

The iPhone SE has plenty of upgraded technologies compared to the similarly sized iPhone 5s, including NFC technology that enables Apple Pay, an identical A9 chip to the one installed in the iPhone 6, an excellent 12MP rear-facing camera that also shoots 4K video, and Touch ID. Not bad for $400. Reports also say Apple promises longer battery life than the more expensive iPhone 6 and iPhone 6s. Here's a look at the device and all of the color options.

Apple will undoubtedly get plenty of flack for releasing a new device without a compelling new technology attached to it. But, if you're a fan of the iPhone 5s and it's smaller, 4-inch display but just wished it was a little more tricked out, the iPhone SE might just be the phone you've been waiting for. Before you make the splurge, be warned, Apple is rumored to be readying a new iPhone 7 for release in the fall.