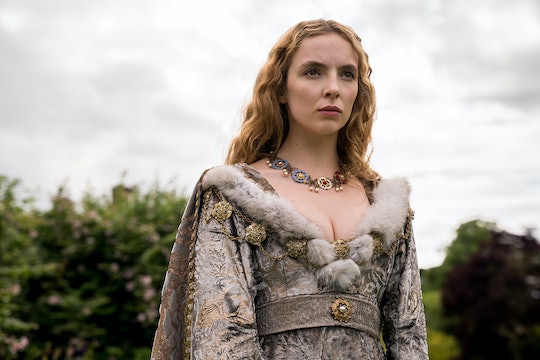 'The White Princess' Tells The Story Of Elizabeth Of York

Elizabeth of York was queen of England during a particularly turbulent time in the country's history. The War of the Roses saw the houses of Lancaster and York at each other's throats for decades as they fought over the throne, but by the time Elizabeth entered the fray the tensions were winding down. The Lancasters emerged victorious when distant relative Henry Tudor was crowned King Henry VII, beginning the Tudor dynasty that would last until the death of the Queen Elizabeth I. To cement his rule and smooth over the contentious relationship between their families, Henry VII married Elizabeth of York. But bringing the country together wasn't that easy.

Though Henry and Elizabeth reportedly had a happy marriage in real life, it certainly would have been difficult for her to be married off to a man who belonged to a warring family. The White Princess seems to follow that thought to its natural conclusion by making their marriage far from peaceful, at least at first. In the show, Elizabeth is presented as a secret schemer who wants to remain loyal to her family while upholding the facade of a loving, dutiful wife.

Elizabeth and Henry went on to have seven children, though only four survived long enough to reach their teenage years: Arthur, Margaret, Henry, and Mary. When Arthur died at age 15, his brother became next in line for the throne and was eventually crowned King Henry VIII — a man who has seen more than a few fictional portrayals of his own. Elizabeth died due to complications from childbirth when she was only 37 years old, and was greatly mourned by her family. Her husband did not remarry after her death.

The real Elizabeth of York apparently did not have much involvement in politics at all. In many ways, she was the ideal queen of the era: beautiful and gentle, but also passive. Many of the more dynamic surrounding figures in her life were the ones who captured public interest over the years, such as her uncle Richard III, who actively went after the throne; her young brothers, the famous Princes in the Tower whose deaths remain mysterious; and her mother Elizabeth Woodville, who lobbied actively on behalf of her family.

In The White Princess, Elizabeth of York is reimagined as someone who is just as active, only secretly, as she takes steps to control her own destiny.