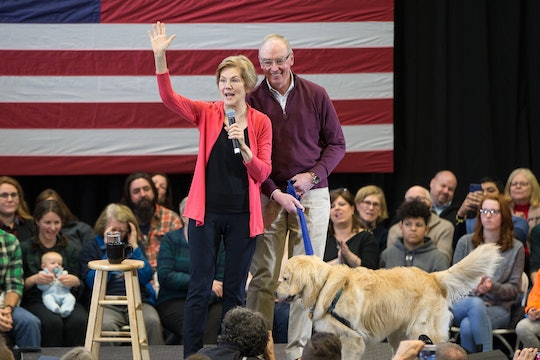 Behind every presidential candidate exists a support team of some sort. For example, Democratic Sen. Elizabeth Warren's husband, Bruce Mann, is someone who is always in her corner as she powers through this election cycle. Beyond being supportive and thoughtful, the presidential hopeful's other half is also incredibly accomplished in his own right.

Mann is currently a professor at Harvard Law School, according to Town & Country, which is where he and Warren met while attending a law conference. Mann is an extremely decorated academic; according to his Harvard bio page, he holds several degrees, including a Ph.D. Legal History and and J.D. from Yale University. In the fall, Mann will be teaching two property courses and in Spring 2020, he'll teach an American Legal History course at Harvard, as his bio states. Mann has also been published in several academic journals and has authored a number of books throughout his career.

Having been married for 39 years, Mann is also undoubtedly a constant source of support for Warren. The presidential hopeful often shares some of their sweeter moments on social media, including a screenshot of an email from Mann with the subject line "Your morning Bailey," which included a photo of their dog. "Bruce sends me an email every morning when I'm on the road... See you Saturday, boys," she captioned the photo.

Additionally, in a 2016 anniversary post on Facebook, Warren shared that she actually proposed to Mann. "I proposed to Bruce in a classroom," she wrote. "It was the first time I’d seen him teach, and I was already in love with him, but watching him teach let me see one more thing about him — and that was it."

Warren explained in an interview with The Boston Globe that Mann stepped up to raise her children, Alex and Amelia, who she shares with her late ex-husband, Jim Warren.

"He did it all," she told The Boston Globe in 2015, explaining how he would fly back and forth from Cambridge to Philadelphia, where he lived prior to working at Harvard, in order to ensure that he was present to coach soccer and attend parent-teacher conferences. "They called him dad," she told the publication.

Beyond being a supportive spouse and stepfather, Mann has played a "low-key role" in Warren's previous political campaigns, like when she ran against (and defeated) Republican Sen. Scott Brown in 2012, according to MassLive. Recently, back in April, he attended a campaign event with Warren in Iowa, which happened to take place on his birthday weekend, as she shared on Instagram.

On their anniversary in July, Warren shared that one of the reasons she loves Mann is because he "always knows what my heart wants" and revealed that Mann sends her a photo of their dog, Bailey, "every day when I’m on the road."

With all that said, between her husband, children, and supporters, Warren undoubtedly has a team standing behind her. And only time will tell if Mann ends up being the country's very first first gentleman.