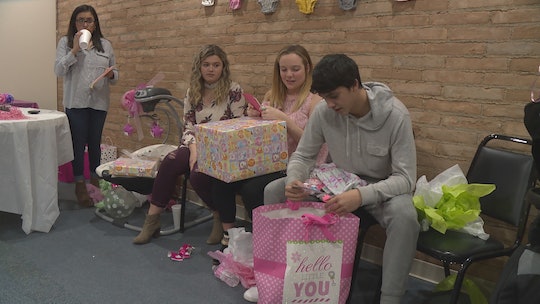 When Unexpected returned to TLC for Season 2, teen moms Lexus and McKayla were still a part of the cast, but several new girls had joined the show as well. One of those new co-stars was 18-year-old Emiley, who was 37 weeks pregnant in the first episode of the second season. Fans wondering who Emiley is on Unexpected got some details of her life during her introduction, including her plans before and after the birth of her baby.

In the premiere episode of Season 2, Emiley and her mother Bridget said that everything in Emiley's life had been going according to plan before she got pregnant. She was in the top ten of her class. She had just become captain of her cheerleading team, she was a member of the varsity softball team, and rodeo was one of her main hobbies. She had been dating her boyfriend Diego since she was a junior and he was a sophomore; the two were insistent about waiting until marriage to have sex. However, that soon changed.

Emiley said that it took her two weeks to come to terms with her pregnancy. "When I found out I was pregnant, I kept telling myself, like, I'm going to wake up and everything's gonna be okay," she said. "Like, this is not happening to me. This stuff doesn't happen to me."

Emily and her mom are especially close because it was just the two of them for a long time. Bridget even referred to them as "best friends." Though Bridget didn't think she hid anything from Emily when it came to how babies were conceived, Emily noted that they'd never openly talked about sex either. Bridget assumed that because Emily said she was waiting until marriage, pregnancy might not have been a pressing concern. But despite how unplanned the situation was, Bridget was supporting Emiley every step of the way.

Emiley and Diego discussed how important it was to have assistance while talking to KSWO 7News. "It's super helpful to have someone else around," Diego said. "Sometimes the help is not always great, but help is help." Though having a child so young would always have its own difficulties and challenges, the aid of Emiley and Diego's parents was instrumental. Still, they felt Unexpected clearly depicted how hard it could be. "It shows day to day roughness, the nice stuff and also so they can relate to somebody else out there," Emiley said.

Children of teen parents have a higher rate of becoming teen parents themselves, according to the U.S. Department of Health and Human Services, and that's been shown on Unexpected. In Season 1, all three of the girls (and several of their partners) were the children of teen moms. But Emiley seems determined that her daughter won't follow in her footsteps. On the show, she claimed that she would talk to her daughter about sex no matter how awkward it was, and would put her on birth control.

Even though the families are banding together to make this work, it seems like there might be some tension between Diego and Bridget. She found him "rude" and "belittling," which Emiley could only defend by saying he had always been that way. Their relationship might weather some rough patches, which is something the show has tackled before with other couples.

Though being a young mom can make things more complicated, Emiley wanted her life to return to normal after her baby was born. A mere two months after the birth, she was planning to try out for a college cheer team and get back on track. Viewers can watch her journey unfold over the course of Season 2, with all its ups and downs, and find out if she accomplishes all of her goals.