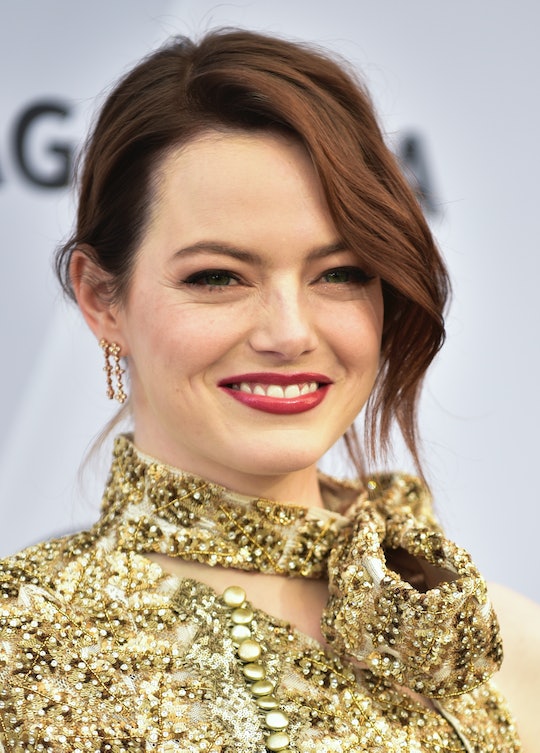 Emma Stone Might Be Bringing A Date To The Oscars

2019 is proving to be a great year for Emma Stone. Her outstanding performances in The Favourite and Netflix's Maniac have earned the actress numerous awards nominations, including an Academy Award nomination for Best Supporting Actress. With the Oscars just days away, fans are wondering who Emma Stone is dating and whether or not she’ll be bringing someone with her to the event.

While the actress hasn’t officially confirmed a relationship, she did attend the 2019 Screen Actors Guild Awards with rumored boyfriend Dave McCary. According to People, the two have been dating since October 2017, and they were spotted together at a Los Angeles Clippers game in this January. There is no word on who Stone will bring to the Academy Awards ceremony this year, but if the SAG Awards are any indication, it will most likely be McCary.

So how did the two meet? Stone first met McCary two years ago when she was hosting Saturday Night Live, reported Elle. McCary — a segment director for SNL — directed one her sketches, titled “Wells for Boys.” About a year after that, in June 2017, Stone and McCary were seen leaving the premiere party for McCary’s film Brigsby Bear together and the two have been rumored to be dating ever since.

Many celebrities take to social media to share details of their romantic lives, but Stone has no official Instagram or Twitter accounts fans can peruse through. In an interview with her BFF Jennifer Lawrence for Elle, the actress admitted that she’s not the type of person who could handle public scrutiny, which is why she stays off of social media. “It feels like a lot of people have to learn lessons publicly now because of the way the world is wired,” she told Lawrence. “I think it wouldn’t be a positive thing for me. If people can handle that sort of output and input in the social media sphere, power to them.”

McCary does have an Instagram account, but you’ll only find pictures of his best friend, SNL star Kyle Mooney. When talking to Vanity Fair in 2017, McCary revealed that he and Mooney have been friends since childhood, and the two went on to pursue their comedy careers together. Now, the two work alongside each other on SNL, along with their other bestie, Beck Bennett. McCary’s Instagram is mostly pictures of Bennett and Mooney, but I know fans are hoping that Stone photobombs at least one of his pictures at some point.

All eyes will be on Stone during the Oscars red carpet, and if she does bring McCary along as her date, it will be a pretty good confirmation of their relationship. Either way, dating or not, I’m sure Stone fans just want her to be happy. More than anything, fans are rooting for her to win Best Supporting Actress for The Favourite at the Academy Awards this year. She’s a tremendous actress with a passion for her craft, and she deserves recognition for the all the amazing work she has been putting out there.