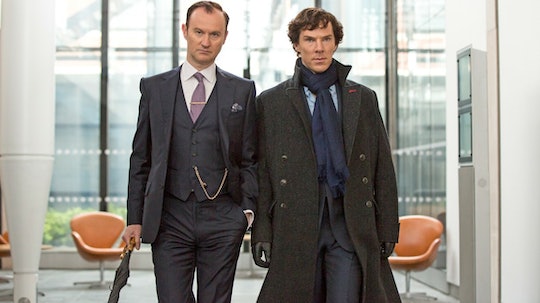 If you thought the Season 4 premiere of Sherlock was enough to send your gasping reflex into overdrive, that was nothing compared to what this Sunday's episode "The Lying Detective" had in store. Not only were we introduced to a new formidable villain in the form of Culverton Smith, but we also finally met the third Holmes sibling, Euros, on Sherlock and boy was it an unexpected surprise. For years fans have been eager to meet what they believed would be a third Holmes brother. But it turns out Sherlock and Mycroft don't have another brother at all — but they do have a sister.

But let's back up for a minute here. It turns out this character has been popping up all season (and yes, when I say all season I do mean during just these past two episodes, but still) in unexpected ways. Euros was actually the woman John Watson flirted with on the bus and continued to have a textual relationship with afterwards. But just in case that isn't shocking enough, she was also the woman who pretended to be Culverton's daughter, Faith, during Sherlock drug-induced chat earlier in the episode. Oh and did I mention she was also John's newest therapist? It turns out she's been everywhere, watching — waiting to make her move.

It's unclear what exactly her motivations are and what she's been up to all this time, but considering she just appeared to shoot at John Watson, I'm thinking she's going to become more of a foe than a friend. But hey, this is Sherlock's sibling after all, so maybe that's just how she says hello? OK, in all seriousness, things aren't looking great for John right now, but I doubt he'll come to any physical harm. They wouldn't kill off two main characters in row like that, right? RIGHT?!?!

But now that her identity has been revealed and with Sherlock on the case, I'm hoping he'll be able to save his BFF before any real harm comes to him. Lord knows John has already been through so much this season. I hate to think of what could befall him next. So is this all just a ploy to get her brothers' attention? Does she really want to harm John when he's done nothing wrong to her? Why has she been kept a secret for all of these years? Also, let's a moment to realize that John had a crush on Sherlock's sister.

In true Sherlock fashion, fans are left with so many more questions than answers, but that's what we love about this show. You can never be too sure what will happen next. The game is on!