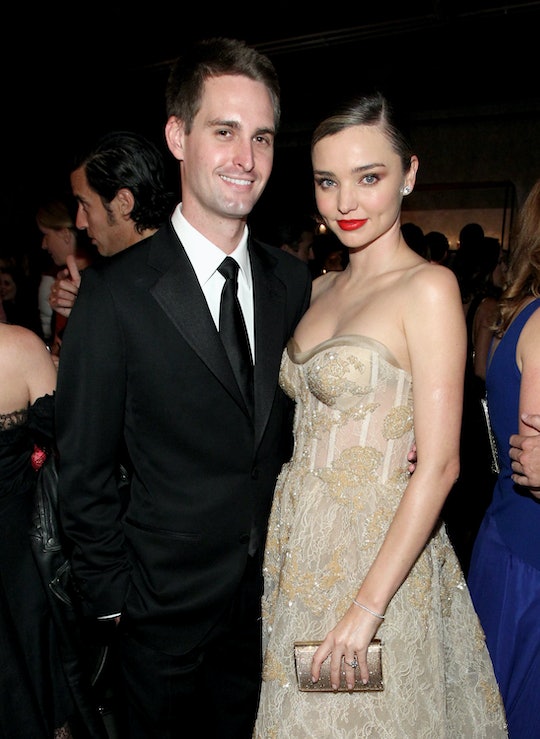 Congratulations are in order for Miranda Kerr! The former Victoria's Secret Angel is expecting her second child, and first with husband Evan Spiegel, according to People. While this is wonderful news for Kerr and her betrothed, some of her fans may be wondering: Who is Evan Spiegel? The short answer: Kerr's second husband is a 27-year-old multi-billionaire.

Spiegel is the cofounder and CEO of Snapchat, one of the largest social media networks that a certain platform tends to emulate often, according to Forbes. The 27-year-old tech leader founded the site back in 2011 with Bobby Murphy, a fellow student at Stanford University. Spiegel became the youngest public company CEO when Snap, Inc., Snapchat's parent company, began trading in March of this year, Forbes reported. He also has a real-time net worth of almost $3 billion.

Spiegel and Kerr first met in 2014, when they were seated together at a Louis Vutton dinner, according to Harper's Bazaar. Kerr and the Snapchat creator became engaged in July of last year, and married this past May, according to People. The pair said their "I Do's" in front of about 50 guests in an intimate but lavish ceremony at Spiegel's home in Los Angeles.

Kerr said of her wedding, according to Harper's Bazaar,

Our wedding was just so joyful. We started the day, did yoga, then our families came over and we literally had this celebration in our backyard. It was incredible. It was so magical.

And despite their age difference, Kerr has praised her husband for his maturity. She told The Edit last year,

He’s not out partying. He goes to work in [L.A.’s] Venice. He comes home early. We don’t go out. We’d rather be at home and have dinner, go to bed early.

Of course, this is an exciting time for the newlyweds. A spokesperson for the couple said in a statement, according to People,

Miranda, Evan and Flynn are looking forward to welcoming the newest member of their family.

Although this may be Spiegel's first child with Kerr, he is already a stepfather to the Austrian model's 6-year-old son Flynn. Kerr had Flynn during her previous marriage to actor Orlando Bloom, who she divorced in 2013, People reported.

In many ways, Kerr's pregnancy news is not entirely unexpected. According to the Daily Mail, Kerr had mentioned that she and her 27-year-old husband planned to wait until after they said their "I Do's" to try their hands at becoming pregnant.

Of their plans to conceive, the 34-year-old Australian model said earlier this year, according to the Daily Mail,

I'm not planning for a child yet. Not until after we get married. My partner is very traditional. We’re just waiting.

Of course, her feelings about pregnancy didn't stop the rumor mill from churning over the summer. A few months after Kerr and Spiegel became married, tabloids began to run story after story speculating that the model was pregnant. The Gossip Cop disproved the rumors at the time.

Still, Kerr, who founded beauty line KORA Organics in 2009, is in love with parenthood. According to US Weekly, the former Victoria's Secret model said being a mother to 6-year-old Flynn is "'the most rewarding thing" she's ever done. She continued,

It has taught me so much about patience and unconditional love. Being a working mother is challenging because . . . I never want to leave him — but it’s important to teach your child the value of working.

Not much else is known about Kerr's pregnancy. The news broke Wednesday afternoon, so there are many details that have yet to be released. Either way, congrats to the couple on baby number two.