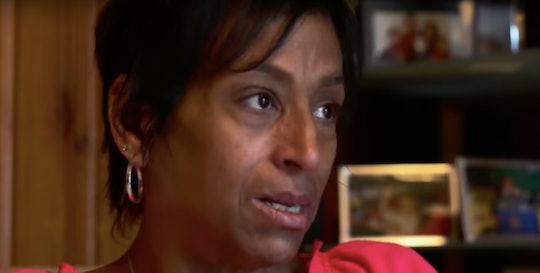 President Donald Trump will give his first official State of the Union address on Tuesday, and he is choosing to make a political statement with his guest list, which includes Evelyn Rodriguez, the mother of a teenage girl who was reportedly murdered by MS-13 gang members two years ago. According to The New York Times, Trump has asked her to be a guest of the White House during his speech and to meet with him.

Rodriguez's daughter, Kayla Cuevas, was killed back in 2016 on Long Island by gang members when she was only 16 years old, as The New York Times reported, and her case soon became national news. Since MS-13 was reportedly founded by Salvadoran refugees settled in Los Angeles, The New York Times reported, the Trump administration has used Kayla's tragic story to push for stricter immigration laws, including building that border wall he campaigned on. It seems highly likely that, with Rodriguez in the audience, Trump will mention MS-13 during his address, and call for a stronger crackdown on immigration.

Still, The New York Times reported that Rodriguez told the press from her home in Brentwood that she didn't intend to be used as a pawn in the immigration debate. She told the newspaper:

I want [Trump] to ensure that we’re going to get the proper funding for the resources for our kids. I’m not here for anybody’s political gain. I just want what’s right to be done. Everybody should put their political agenda aside and think about what’s going on in our country.

Many immigrants from Central America who have fled to the United States in recent years have done so to escape the violent grasp of MS-13 in their home countries. Yet in many cases, after making the arduous journey, they have arrived in the suburbs of Long Island to find that MS-13 members already have a thriving presence in the schools and neighborhoods that were supposed to provide shelter. In 2016, the Department of Justice estimated that MS-13 had more than 6,000 members in the United States.

The gang is known for brutal murders and attacks. Kayla Cuevas, for example, was allegedly killed, along with her 15-year-old friend Nisa Mickens, by gang members with baseball bats and machetes, The New York Times reported. Cuevas, who was Amerian-born, had reportedly argued with gang members at her high school before the murder, according to The Atlantic, and Rodriguez had reportedly complained previously to the police about her daughter being bullied by gang members, but her complaints allegedly weren't taken seriously.

Suffolk County police told The New York Times that MS-13 members were responsible for 17 murders in the county between January 2016 and July 2017. Attorney General Jeff Sessions even came to Long Island and, in a speech, vowed to eradicate the gang.

Sessions and Trump have used MS-13 to call for a crackdown on illegal immigration, according to CNN, saying that the violence has worsened because of more immigrants coming into the country from Central America. Yet many of the people targeted by the gang are immigrants who have come to this country for protection, and Sessions in his speech did not offer any assurances to the immigrant population that they could come to law enforcement for protection without fear of deportation, according to The New York Times.

Rodriguez, for her part, has become an activist since her daughter's death, working hard to protect people from gang violence. She told The New York Times back in July that what she wanted was more support and funding for kids, not to cut off immigration for good people who need safety. According to the publication, she said:

I believe everybody has a chance to make it in the United States, but if you’re coming here to be a criminal and to be garbage, then we don’t need you. But if you’re here to do the right thing for your family and work hard, I back you up.

Hopefully, the country can come together to protect all those who need safety from violence.