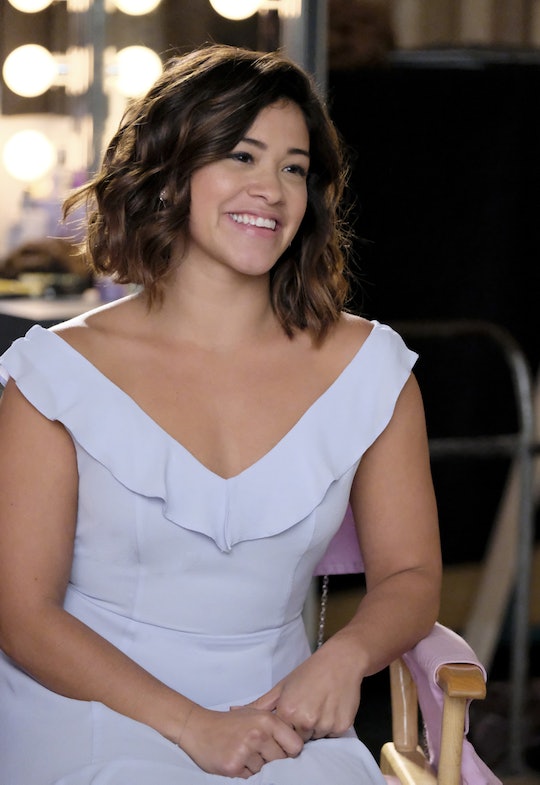 Jane May Have A New Love Interest On 'JTV'

Love is in the air on Jane the Virgin! Just when it seemed dating might not be in the cards for Jane right now, in walked Fabian and there was definitely some heat. So who is Fabian on Jane the Virgin? He's Rogelio's new costar and may very well end up turning into Jane's new love interest.

After the hot mess that was Rogelio's reality show with Darci, Rogelio was finally able to find a new job on a show that is loosely based on Gulliver's Travels. While Rogelio stressed about whether or not Bruce would actually be able to get him out of his contract with the reality show, his executive producers asked how he'd feel about having a hot costar. Whether he was distracted or he just assumed the costar would be woman, Rogelio eagerly said yes. However, he was very surprised when the producers introduced him to Fabian.

Fabian seemed to be a fan of Rogelio, but it was clear all Rogelio saw was onscreen competition. Fabian is obviously younger than Rogelio and has washboard abs that no one could take their eyes off of, especially Jane, who recently realized she's ready to try dating again. Though Jane's attempts at dating throughout the episode didn't go so well, that didn't stop her from taking in Fabian and standing up to get a better look at him. For now, it looks like Jane's interest in Fabian is just physical, but who knows — maybe she'll find that the glow she first felt when she saw Fabian, will move on up to her heart.

Based on the preview for the next episode, it definitely looks like Jane will give it try with Fabian and it doesn't look like he'll resist. However, there is one person who seems to have a clear problem with it: Rogelio. Forever the jealous type, Jane's dad won't be too happy to discover the reason why she suddenly has an interest in his new show has little to do with the actual show and more to do with his hot costar.

Still, Rogelio is reasonable (occasionally) and surely if Jane really wants to go out with Fabian, he'll support her. The real question is will their flirtation turn into an actual relationship or will this just be a fling for Jane to get her feet wet before really diving back into the dating pool? Unfortunately, fans will have to wait a bit to find out.