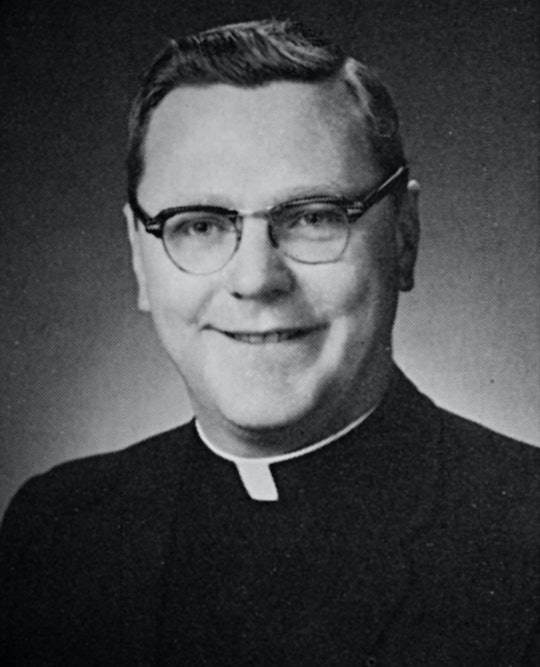 The upcoming Netflix original true crime documentary series The Keepers depicts the ongoing investigation into the unsolved murder of Sister Cathy Cesnik, a former teaching nun at Archbishop Keough High School in Baltimore, Maryland. The show delves into the decades-old cold case of the young nun who vanished in late 1969 and was found dead two months later. One of the central players in the Netflix story is Father Joseph Maskell. But who is Father Joseph Maskell on The Keepers? According to the series, not a good guy, that's who.

According to Huffington Post's 2015 feature on Cesnik's murder, Maskell was the chaplain of Archbishop Keough High School at the time when 26-year-old Cesnik taught English and drama there. Described as a "burly, charismatic priest," he was 30 years old at the time of Cesnik's death and in the years since has been accused of sexually abusing dozens of his students over the course of years during that timeframe. (He denied initial accusations until his death in 2001.) Former students and abuse victims told HuffPost that they'd confided in Cesnik about the rampant abuse they were allegedly experiencing prior to her death and that the beloved teacher had intervened on their behalf. This intervention, the victims and Netflix series allege, may have led to her death and a massive cover-up of the crime.

At the time of Cesnik's disappearance and death, Maskell had an enormous amount of pull in the heavily-Catholic city. He was the chaplain for the Baltimore County police, the Maryland State Police, and the Maryland National Guard, according to HuffPost. Several detectives who worked on the case, including retired homicide detective Louis George "Bud" Roemer, reported having been told by "higher-ups" in the police department to lay off the investigation at various junctures.

Romper reached out for comment to the Baltimore County Police Department regarding any suggestions of a suspected cover-up, to which they stated:

In the nearly 50 years since Sister Cathy Cesnik’s murder, no one has come to us to initiate an investigation of wrongdoing by police officers. If anyone has information about improper actions by police in connection with this case, we strongly encourage them to come forward now so detectives can conduct a formal, proper investigation.

The Baltimore Archdiocese also provided a statement regarding the accusations against Father Maskell's involvement in Cesnik's death and commented that "Father Maskell was never considered a suspect in that murder. He was interviewed once. One of the victims claimed that she had a recovered memory of his involvement in her death, but he was interviewed and never charged." Maskell denied knowing anything about Cesnik's murder.

"Nobody ever told me to back off the investigation in order to protect the Catholic Church," Roemer told the Baltimore Sun. "And if they had, I wouldn’t have done it. But the word did come down from higher levels of the police department that we had to lay off [Jesuit Father Gerard J. ("Gerry")] Koob [an ex-boyfriend of Cesnik's, initially a person of interest in the crime]. And I couldn’t help wondering if maybe one of the Catholic officials had gotten to somebody high up in the police."

In 1994, police dug up records that Maskell had ordered buried in Holy Cross Cemetery years earlier. One anonymous former detective on the case reported that the boxes had contained psychological evaluations of the students Maskell counseled at the school — allegedly, the priest preyed upon the most "troubled" students under his care — and even nude photos of underage victims. But the photos were never recorded as evidence and "inexplicably vanished" after being uncovered in the dig, so they cannot be considered evidence or even in existence.

According to the Los Angeles Times, Maskell (who denied initial accusations until his death in 2001) was removed from the ministry in 1994 and afterwards fled to Ireland. He had returned to the United States by 1998, when the archdiocese learned that he was living at a Catholic nursing facility in Maryland. Maskell died in 2001, but just prior to the premiere, the Baltimore County police department announced that they'd exhumed the priest's grave to compare his DNA evidence with the little remaining evidence in Cesnik's cold case. The results came back on May 17 and revealed that Maskell's DNA did not match crime scene evidence, according to The Washington Post.

As of now, the true nature of Cesnik's death and whether Maskell was actually involved are undetermined. Hopefully, the attention and hype that the Netflix series puts on this case will help the truth about Cesnik's tragic death come to light, much as the popularity of Serial and Making a Murderer did for their respective cases.