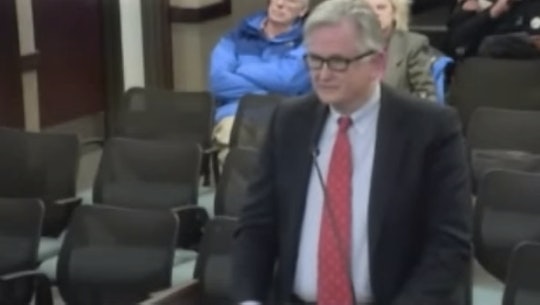 Who Is Fleet White? He Was A Close Friend Of The Ramsey Family

The unsolved murder of JonBenét Ramsey has long captivated Americans, if only because so many still want to know who was responsible for her death. But the open murder investigation of the 6-year-old has taken a much greater toll on the lives of the people involved with the investigation or were close with the Ramsey family. Like Fleet White, who was a neighbor and close friend of the family, so much so that they had celebrated the Christmas holiday together, and White and his wife, Priscilla, were at the Ramseys' house the day after Christmas when JonBenét's body was discovered in the basement.

Once The Case Of: JonBenét Ramsey, the CBS docu-series about the 1996 murder, airs later this month, it's likely that a new round of conspiracy theories — since there are already so many of them — will take hold of everyone's attention. Already, if you go down certain Internet clickholes about the murder, Fleet White and his family are the focus of some of these (completely unproven) theories. And it's made their lives tough, they said in a 2008 interview with The Denver Post.

White and his wife, Priscilla, were never suspects in the investigation. They were only ever considered witnesses, as associates of the Ramsey family and because Fleet was there with Ramsey's father when they found the body. But there are Internet sites that allege he is guilty of the murder, in as well as Satanism, pedophilia, and child torture. White told The Denver Post that he also lost his job in the oil industry and had to more to consulting because of his association with the case. If you Google "Fleet White" it's not hard to find these unproven accusations.

In September of 2008, Boulder District Attorney Mary Lacy wrote in an exoneration letter that the Whites requested, “You and your children are witnesses to events and circumstances before and after the crime occurred, due only to your friendship and association with the Ramsey family.”

According to White, though, the letter isn't enough. Lacy had also written an exoneration letter to the Ramsey family, exonerating John, Patsy, and Burke Ramsey of any suspicion. John Ramsey provided the letter to the media, according to Lacy, since the case and his family's alleged involvement in his daughter's death was still tabloid fodder. But White would've liked the same kind of attention, since he says that his family has suffered. In the years after the case, Fleet White has sought other letters from lead officials in the case. In 2014, the Boulder police Chief Mark Beckner released a statement saying:

The Whites were estranged from the Ramsey's during the investigations. When they were subpoenaed to be witnesses in the grand jury trial, the family released a letter to the Boulder community sharing their opinions about how the case was being handled. They weren't fans. After pointing out what they saw as flaws in the handling of the investigation in a long letter published in The Denver Post in 1998, the Whites wrote, "The people of Colorado are entitled to be frustrated and angry with those public officials and other persons who have brought this case to its current status."

"We must be mindful, however, of the first cause of the investigation's failure — the refusal of John and Patsy Ramsey to cooperate fully and genuinely with those officially charged with the responsibility of investigating the death of their daughter, JonBenét," they added.

White's referring to his belief that the Boulder County District Attorney, Alex Hunter, and the Ramsey's main lawyer, Hal Haddon, were reportedly too "chummy" with each other. In the same request for a special prosecutor, White also alleges that his estranged friend, John Ramsey, had alienated the police detectives by accusing the police of leaking evidence to the media, according to a 2008 The New York Times. But those claims weren't enough to sway then Colorado governor Roy Romer to bring in a special prosecutor.

It's possible that the flood of JonBenét Ramsey documentaries and movies in honor of the 20th anniversary of her murder airing this month, new evidence or information can bring some peace to the White family. All of the statements from officials exonerating the family doesn't seem to be working.