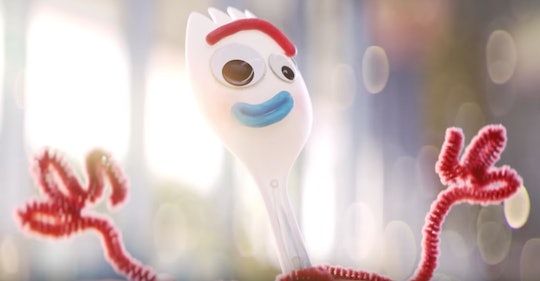 Disney and Pixar's Toy Story franchise has been entertaining families for the past 24 years. There's just something about that trusty cowboy named Woody and his collection of toy friends. And, good news, there are even more characters to fall in love with when the newest Toy Story film hits theaters next month. But before watching it, people might be wondering who exactly Forky is and what his role is in the newest Toy Story. Because this upcoming installment is all about their adventure to save the flustered spork.

In the final trailer for the film, released on Tuesday night, people get to see more of the little spork who will make a huge impact once the film is released on June 21. Now that all of Andy's favorite toys (including Woody, Buzz Lightyear, and others) are now living with the super adorable Bonnie, the crew is bound to get into new shenanigans and meet some new characters along the way, like Forky.

In the new Toy Story 4 trailer, Bonnie makes and brings home Forky, a spork with popsicle stick feet and pipe cleaner arms who's unsure of the world around him (or even if he wants to be a toy).

Forky (voiced by Veep actor, Tony Hale) seems like a fun, albeit, a little nervous, addition to the cast of characters in the film. And this final trailer for the film only alludes to that.

Woody's desire to be the hero and save the day comes out in full force in Toy Story 4 where he vows to protect Forky at all costs, even if Forky doesn't want protecting. And once Forky becomes lost, it's up to Woody and his friends to save the day and save their spork — even if that means going on an adventure of their own and meeting new people along the way.

Needless to say, Forky is going to shake things up in their universe, but in the best way possible. The film's director, Josh Cooley, explained to Animation World Network that he is excited for people to meet Forky. "Forky is a toy that Bonnie made out of a disposable spork, so he's facing a crisis," he said. "He wants to fulfill his purpose as a spork, but now has a new toy purpose thrust upon him."

It sounds like he is going to make things very interesting, especially since he is going through a major crisis. And people on Twitter are loving it.

If people are loving Forky already, before the film has even come out, then they're definitely going to love him even more once the film reaches theaters on Friday, June 21. And people will be relieved to know that they can get a Forky for themselves — Target is now selling Forky action figures and a DIY Forky kit, where kids can build their own Forky from a spork, just like Bonnie.

But Forky isn't the only new toy introduced in the new trailer. Viewers also got to get a glimpse at the new hotshot toy in town — Duke Caboom, a daredevil action figure (from Canada) played by Keanu Reeves. "Duke becomes a part of [Woody and Bo Peep's] mission," Reeves told People. "They use his skills as a motorcycle daredevil but what they ask him to do is confront his fear of failure. So he has to kind of face his fear in order to help the greater good."

It sounds like Forky isn't the only one having a crisis in the new film. Luckily, fans of Toy Story, both young and old alike, won't have to wait too long to watch this unfold.