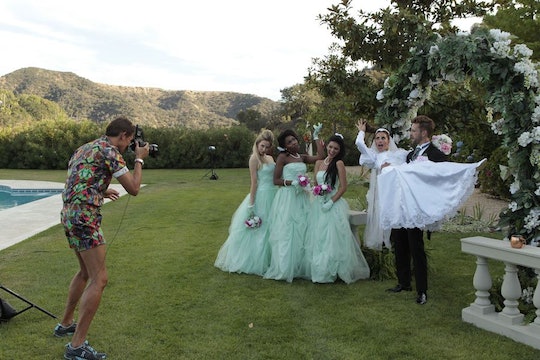 Franco Stole The Show On ‘The Bachelor’

Nick Viall's first group date as the Bachelor involved a cheesy photoshoot, four naked breasts, and one extremely charismatic photographer. So who is Franco on The Bachelor? He's basically the star of the first group date. Basically, Franco is everything you want in a photographer: he's encouraging, he's nurturing, he coaxes people into confessing their intimate feelings (and then captures them in the moment on film), and he showed up in a neon printed romper. Oh, and he has a perfect mustache.

Twitter immediately fell in love with him and several people began suggesting that he has the potential to a.) helm his own show, possibly of the Bravo reality variety, or b.) replace (or join) Jorge as the official bartender of Bachelor in Paradise. While he'd a perfect choice for BiP pep talks when heartbroken loners are on their fifth tequila drink before 3pm, Franco Lacosta is actually way overqualified for the job.

According to his website, he's "an international high fashion model turned photographer and menswear designer." And based on the bold patterns in his menswear line, it's probably safe to bet that the piece he was wearing on The Bachelor was from his own collection. Although he was born in New York and later studied art history at Pratt, Lacosta was raised in Puerto Rico. He also learned the ins and outs of the fashion industry from an internship at a fashion house in Milan.

He's been featured in Italian Vogue, was a Parisian brand ambassador for Yves Saint Laurent, and has created content for NBC. (So the idea of him being a Bravo reality show star isn't that far off.) And if he looks familiar, it's because he's been featured on America's Next Top Model before! Currently, Lacosta resides back in New York, where he is working on his menswear and accessories line.

For Nick's first group date, the women donned several themed bridal gowns, with the exception of a few "unlucky" bridesmaids, for a wedding photoshoot. Franco was not only the photographer for the day's festivities, but he would also choose a "winner" out of the group who would receive extra time with Nick on the date. Unfortunately, Franco didn't make a very popular choice when he rewarded Corinne for doffing her bikini top and reenacting that infamous Janet Jackson photoshoot. In fairness, Corinne does have a modeling background so the deck was stacked in her favor. But Twitter doesn't seem to be holding it against Franco.