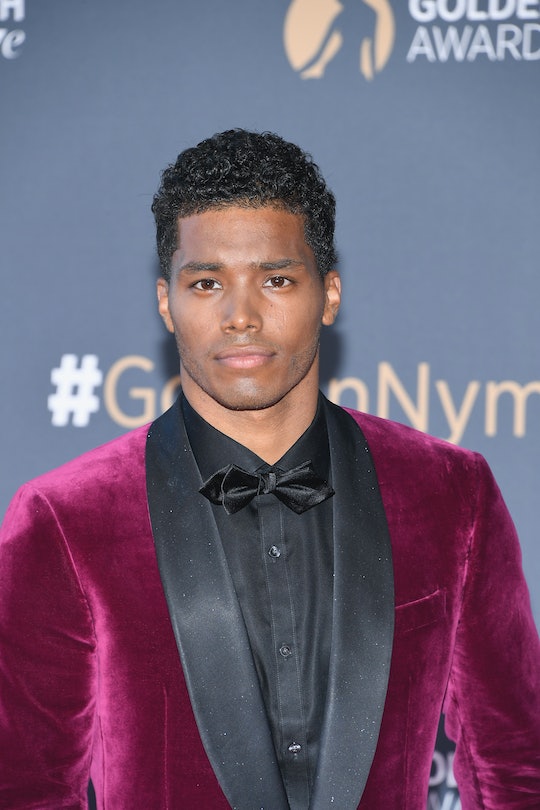 In the last moments of its Season 4 finale, How to Get Away With Murder introduced a brand new character who looks like he'll be very important as the show goes forward. But who is Gabriel Maddox on HTGAWM and why does he seem so significant? Unfortunately, "Nobody Else Is Dying" was heavy on the mystery but light on explanations. Fans are going to have to wait until Season 5 to get some answers, but until then they can speculate — and maybe they'll even land on the truth.

Gabriel first appeared when Frank was signing in at what appeared to be his Middleton law school orientation. Gabriel was flirting with the woman in charge of the sign-in sheet and Frank noticed him immediately. More importantly, Frank appeared to recognize him, though he didn't seem too happy about it. Before the episode reached its conclusion, he had called someone up and announced, "Looks like the good times didn't last too long. The kid's here."

It seemed especially notable that the episode cut almost directly from Nate looking at Bonnie's file to Gabriel. And in Bonnie's file were some DNA results with a very heavy-handed, all-caps note that read, "CHILD ALIVE?" Fans might remember that flashbacks earlier in the season revealed Bonnie had a child when she was young, though she never knew what happened to it. Thus one theory about Gabriel was born: he could be Bonnie's son.

Bonnie gave birth when she was only fifteen, so it is possible that her child might be old enough to be attending law school now. The circumstances of Bonnie's pregnancy and delivery were incredibly traumatic; not only was she a young teenager, but she was being abused by her father and many other unknown men. She likely didn't know who had gotten her pregnant, and after she gave birth her father told her the baby died. There is absolutely a chance that he gave the child away without telling her, so perhaps Gabriel is her son resurfacing after all these years.

Other fans suspected that Gabriel was actually Annalise's child, who had been mentioned earlier in "Nobody Else Is Dying" when she was arguing with Jorge. However, that's less likely. Nate was pretty clearly looking at Bonnie's file when he spotted the note about the child, and Annalise also held her stillborn baby in her arms after he was born. It would be pretty cruel for her son to be alive after everything she went through in the hospital.

A third theory about Gabriel is totally disconnected from the files Nate was pouring over. Some fans on Twitter suspected that Gabriel was actually Wes' brother, which is possible as well. Though Wes' mother did not appear to have any other children, that doesn't mean she didn't have any; viewers only got to see her during a very specific time in her life shortly before her death. Wes' biological father could have also had other children, making it plausible that his long lost brother is here to figure out what happened to his recently deceased sibling.

In an interview with Entertainment Weekly, executive producer Pete Nowalk seemed to support the theory that Gabriel is Bonnie's son. When asked, he left it open for many different possibilities, but admitted that they were implying that could be true.

Obviously that's a big mystery. We're hinting that it's Bonnie's kid. All we know is that Frank called someone and said, 'Her kid's here.' That pronoun, her, covers a lot of our characters, and maybe characters we don't know. We don't know who Frank is talking to, so that's really a huge mystery for the next season.

Whoever Gabriel is, it seems obvious that he'll be a major part of the next season and I, for one, can't wait to see how this all plays out.