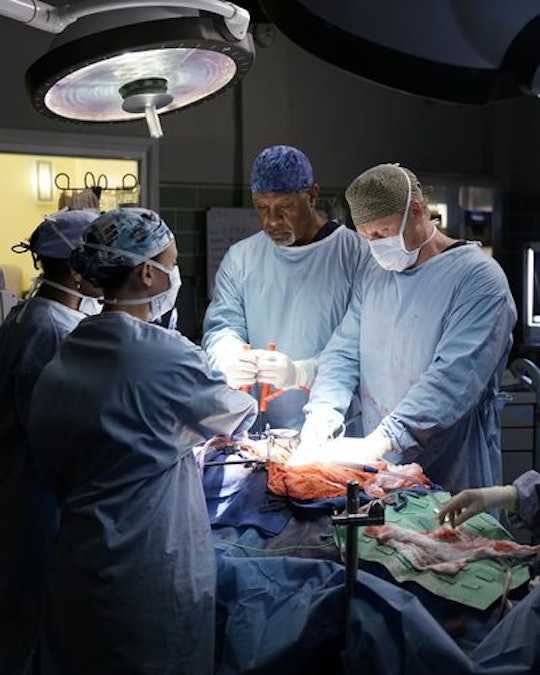 Who Is Gail On 'Grey's Anatomy'? Webber Seems Invested In His Imaginary Patient

Grey's Anatomy's Season 13 episode "The Room Where It Happens" started off oddly, with Dr. Webber inventing a backstory for a surgical patient in critical condition to help the doctors treat him better. He named the patient Gail and started making up personal details for her, but who is Gail on Grey's Anatomy? She seemed like more than just a figment of Richard's imagination.

This episode felt markedly different from the usual fare on Grey's for a reason — it was stylized to feel like a one-act play. Webber gave surgeons the directive to imagine a backstory for the patient on the table in an effort to stop Meredith and Owen's quibbling over how best to treat him. It's a teaching technique from Eliza Minnick, and, since resident Stephanie is in the room, he decides to deploy it for her benefit. As the episode unfolds, however, treating John Doe dredges up memories for each of the doctors, which come into focus right in the operating room. Jerrika Hinton, who plays Stephanie, told TVGuide in an interview:

"The way that this is set up with all of the magical realism in there, all of the spectacle...standing in the room and seeing the special sets they built specifically for this and the little shadowboxes built into the set, it was all super theatrical on the day."

Webber's memory was of a woman named Gail, a cello teacher for whom he recalls very specific details. Based on the way she's dressed, and the way she talks about her sons and "the war," it seems like she's a figure from Richard's childhood. Eventually, it becomes clear that Gail is Richard's mom, and that he still feels guilty over not being able to intervene when she was diagnosed with pancreatic cancer. Of course, he was only a child at the time, so there was no way he would have been able to spot her symptoms and give a diagnosis.

But it's clear that her suffering for so long, only to be given six months to live when she finally was diagnosed, motivated Richard to become a doctor. He later confessed to Dr. Grey an experience in which he lost a patient who also died of pancreatic cancer, just like his mom, and that his training to remain emotionally detached while performing surgery worked against him. So he began imagining his mother to humanize his patients for himself and perform better. It may have been an unusually stylized episode, but its flashbacks to such personal moments in the surgeon's lives lent it all the drama and emotion fans expect of a Grey's episode.