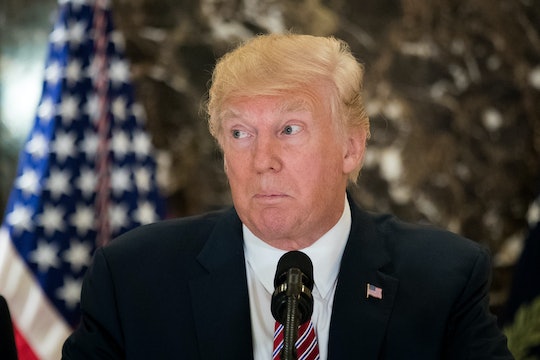 Who Is General Pershing? Trump's Latest Tweet Has Puzzled Many

It's really no secret that President Donald Trump has said a good deal of questionable remarks. From his presidential campaign trail, to his Twitter page, and everything in between, Trump isn't exactly renowned for his well thought-out insight and words of wisdom. He's been criticized for his response to numerous current events, both in the United States and around the world. And now, following a terror attack in Barcelona, Trump has once again taken to Twitter to express some rather controversial thoughts. So, who is Gen. John Pershing and why does Trump want Americans to study up on his tactics?

Well, if you look further into history, you'll see that the president implied that he wants to fight terrorism using a debunked myth involving — wait for it — pig's blood.

After sending off one particularly uncharacteristic tweet regarding the terrorist attack in Barcelona, in which the POTUS sounded sincere in his remorse, Trump then decided to crank things up a notch. by recalling a statement he made on his campaign trail: "Study what General Pershing of the United States did to terrorists when caught," Trump tweeted on Thursday. "There was no more Radical Islamic Terror for 35 years!"

Not long after this claim hit people's news feeds, it was quickly fact-checked and found to be untrue by historians. But, that doesn't mean it isn't cause for concern. Why? Well, the method Trump is referring to involves killing Muslim prisoners with pig's blood, and is totally false.

According to The Washington Post, Trump first delivered remarks about Pershing during a 2016 campaign rally in Charleston. Here is the tale he told:

They were having terrorism problems, just like we do. And he caught 50 terrorists who did tremendous damage and killed many people. And he took the 50 terrorists, and he took 50 men and he dipped 50 bullets in pigs’ blood — you heard that, right? He took 50 bullets, and he dipped them in pigs’ blood. And he had his men load his rifles, and he lined up the 50 people, and they shot 49 of those people. And the 50th person, he said: You go back to your people, and you tell them what happened. And for 25 years, there wasn’t a problem. Okay? Twenty-five years, there wasn’t a problem.

Historically speaking, there is very little about Trump's story that is true. One historian, Brian McAllister Linn, who works at Texas A&M University, even said that "This story is a fabrication and has long been discredited. I am amazed it is still making the rounds," according to PolitiFact.

On the contrary, historians have said that Pershing wasn't as violent as Trump made him out to be. "He wasn’t solely committed to fighting as people like Trump who tell the pig blood story imply," Lance Janda, a military historian at Cameron University, said, per Politifact. And even if Trump's remarks were true (although, according to The Hill, his own campaign manager knows that they aren't), it wouldn't really matter.

Using Islamophobia tactics to attack an entire culture is not OK. And considering that Pershing died in 1948, using similar strategies nearly 70 years later probably isn't the best idea either.