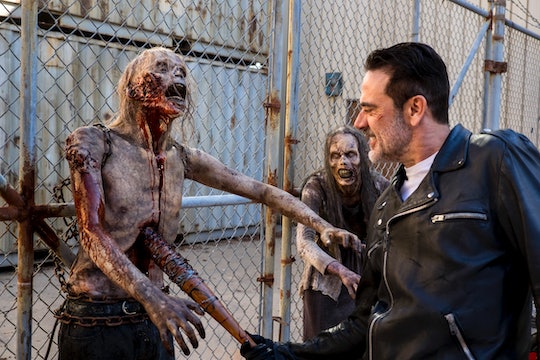 Maggie Meets A Mysterious Figure On 'The Walking Dead'

A new character was introduced to the world of The Walking Dead in "The Key," a woman named Georgie who crossed paths with Maggie, Michonne, Enid, and Rosita. But who is Georgie on The Walking Dead, and will she be a friend or foe? The former seems possible, but you never know who can be trusted on this show.

Georgie seemed suspiciously well-dressed and put-together for someone surviving in the zombie apocalypse. She wore a neat suit and had a van full of supplies, as well as two guards. She wanted to trade knowledge, and she praised the other women for the communities they had been able to set up in the last few years. She seemed amiable enough, but Maggie was unconvinced — and after the last month, who could blame her? She didn't lower her gun during the initial meeting with Georgie and ultimately decided to bring her and her friends back to Hilltop.

There doesn't seem to be a character in The Walking Dead comics named Georgie who looks like the character played by actress Jayne Atkinson on the show. That just makes Georgie's motivations all the more mysterious. She may give the appearance of being perfectly pleasant and friendly, but these characters have come across people like that before. They don't want to risk being fooled again, so it's better to be safe than sorry.

According to Atkinson, if Georgie seems oddly untouched by the apocalypse, that's because she is. Atkinson told ComicBook.Com:

Wherever she's from and however things happened, she has not been touched physically in the way that everyone else has. So I wouldn't say psychologically she hasn't, but, however, she has come out of this more than just surviving.

Atkinson was also as in the dark about Georgie's backstory as the audience was; apparently showrunner Scott M. Gimple didn't share any secrets with her. Still, Atkinson remarked on how unique Georgie was compared to others who have wandered through the universe inhabited by Rick and his crew. In the same interview, Atkinson said:

There hasn't been a person like her. She's not dirty. You can tell she's very educated. She's very unafraid. And there's a strange sort of light and innocence to her. She's not childlike in any way, but she's just open and not afraid.

Though there might not be a character in the comics named Georgie who looks like Atkinson, some viewers on Twitter did notice similarities between Georgie and a group called the Commonwealth. In the comics, the Commonwealth is an advanced city containing thousands of survivors, and they have a leader named Pamela Milton. Pamela does bear a striking resemblance to Georgie, right down to the blazer, so it's possible the show just altered her name to keep the audience guessing. Georgie did hand Maggie a document full of helpful technological information, which seems to reflects the advancements intrinsic to the Commonwealth.

It's still slightly too early to figure out what Georgie's intentions are, but right now she seems to be on the side of good. She gave the Hilltop help and food, even though it was surprising that she didn't ask for anything besides records in return. This could very well be the introduction of the Commonwealth, which means Maggie could have a new ally on her side instead of one more threat to disband.

It would be nice to have some hope on The Walking Dead since the last few seasons have been so bleak, but perhaps Maggie should stay on guard for a little bit longer. This connection seems promising now, but you never know what turns the story will take.