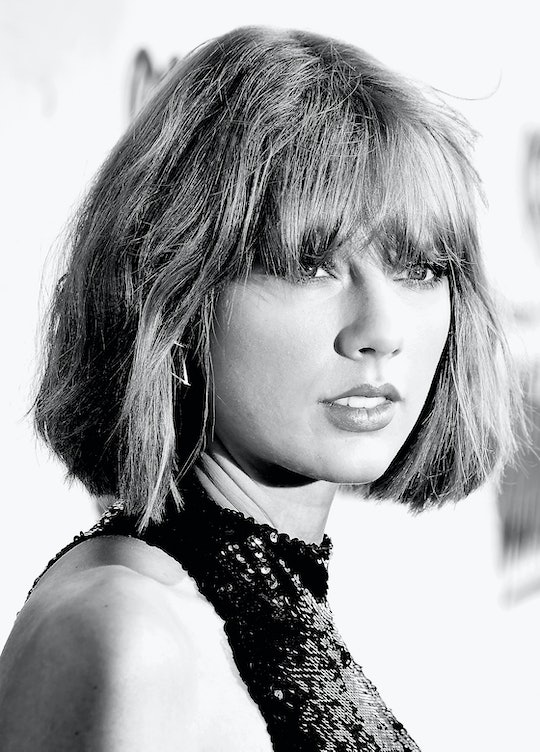 Since the release of Reputation on Nov. 10, Taylor Swift fans have been buzzing about the meaning behind each of her new songs. One song in particular has produced a wide variety of theories. So, who is "Getaway Car" about? According to Twitter, potential subjects range from Ton Hiddleston, Joe Alwyn, Nicki Minaj and more. But, there are two main contenders, judging by public opinion. But, since Swift's newest album seems to be tackling a number of issues from her past, nothing is off limits.

The lyrics to each of Swift's new songs from her sixth studio album, Reputation, were quickly made available online — and fans have been reading them all right. Famous for retrospection, throwing shade, and hidden meanings in her songs, Swift has primed fans for the sort of close reading that produces fan theories. The lyrics to "Getaway Car" are loaded with potential symbolism and fans have *~theories* about them.

Swift's past reputations have been the subject of a number of her hit songs, leading many to believe that "Getaway Car," as well as other Reputation songs are about either an ex or a current boyfriend. The lyrics are clearly aimed at someone close to her, but which person that is, well, is anyone's guess. Twitter has weighed in on what — or who — this potential hit is about, and guesses are all over the place.

One popular contender for the star of this song is Swift's ex-boyfriend, Tom Hiddleston. The first spark between the two was at the May 2016 Met Gala, according to E! News, when they shared a special night of dancing. Just a few months later, the relationship was public — a move that Swift later seemed to regret. After what looked like a whirlwind summer romance, the two called it quits in September of the same year, according to People.

Swift made mention to the famous "I Heart T.S." tank top that Hiddleston was photographed wearing in her video for "Look What You Made Me Do," bringing him into the Reputation narrative. Many fans on Twitter believe that she did the same thing with "Getaway Car," perhaps alluding to rumors that Hiddleston got her "away" from another ex, Calvin Harris. And with these lyrics, according to Genius, it's pretty convincing one:

Another popular theory is that "Getaway Car" is all about Swift's rumored current boyfriend, Joe Alwyn. Alwyn is a 26-year-old British actor that The Sun U.K. reported Swift has been dating for much of 2017. The two allegedly decided to keep the relationship quiet, following the fallout from the Hiddleswift breakup. An alleged source close to the couple told People that Alwyn may be "the one," saying:

The success of the rumored relationship — which neither Swift nor Alwyn has officially confirmed — has led many fans to believe that much of her new album is about him.

Other miscellaneous theories include Swift taking on the music industry, streaming companies, and Nicki Minaj and her brother. The music videos for "...Ready For It" and "Look What You Made Me Do" were famously loaded with Easter eggs of meaning.

Perhaps if and when Swift releases a video for "Getaway Car," the subject that inspired the already popular song will be explained. Until then, I'll leave it to then Twitter-verse to speculate and theorize every meaning under the sun. I trust it is in good hands.