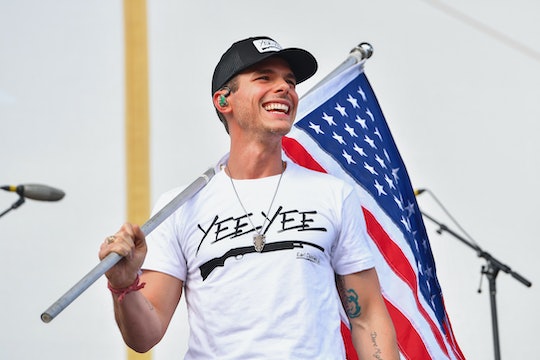 Granger Smith Will Be Crooning On 'The Bachelorette' Tonight

Alright, let's just get this straight before we go any further. Nothing will ever, ever compete with Lil Jon's appearance on The Bachelorette earlier this season. Playing "Turn Down For What" while Becca smashed a bunch of Arie's things was absolutely priceless. There are some big shoes to fill in the Bachelor Nation celeb cameo department, but this week's musical guest might just be able to do it. So who is this Granger Smith guy?

If you're a country fan, you already know that Smith, a Texas native, is a singer and songwriter who has nine whole albums that have topped the country charts. Which means that he won't be doing any silly obstacle courses or playing some game with the suitors. Instead, he's reportedly performing his newest single "Happens Like That" during a one-on-one date. Smith is also appearing on Jimmy Kimmel's show Monday night, and he's slated to perform “You’re In It." Hopefully Becca and whoever her date is enjoy it — expect lots of PDA and slow dancing, as there always is when a musical guest graces a one-on-one.

The song he performs has already been released, but it's going to be on still untitled fall 2018 album release, according to Rolling Stone. It's actually a really good fit for the show, since if you listen to the lyrics, it's about falling in love, getting engaged, and starting a family. You get it more if you watch the video, in which his wife and kids make cameos.

Smith told CMT about the video for the new hit, "This has been the most extensive music video I’ve done, and we’ve done a lot of them." He added:

We shot the video in a massive cornfield and a silo and it gives the video this mysterious tone. TK [McKamy, the director] had a vision that the imagery would be kind of like a memory and these lightning strikes make time pass through these stages of life and love.

Smith has been in the music business since he was 19 years old and left Dallas, Texas for Nashville, Tennessee, the country music capital. He told Rolling Stone Country in 2016 that things have really changed since he came up. the 38-year-old songwriter said:

I think about back then when I was 19 and just how fast the business was. It was always one step ahead of me. It was always a little bit faster. And as the years went by, it really slowed down for me. And I feel like my brother and I kind of see it now before it happens.

Smith also has an alter ego named Earl Dibbles Jr., who often appears on stage during Smith's own shows and records his own music. According to Rolling Stone, Earl is a "shotgun toting redneck" to Smith's, well, not shotgun toting redneck personality. He told Country Countdown USA:

Earl started as a promotional tool. My brother and I were making YouTube videos. The goal was to get a million views. Try to come up with something that would go viral. Earl was a voice, I hadn’t used that voice for years. It represents a mixture of some family members and friends.

He added, "We threw it together, put it on YouTube, and it got a million views. Then I thought Earl needs a song. So I wrote a song called "The Country Boy Song," that was his day put to music." And it was a hit — they made a music video, it went viral twice and the rest is history. Smith explained, "At that point, I thought Earl needs to be part of the show. We have not looked back since that day.” They're both great performers, but Smith was definitely the better fit the one-on-one date this week. Maybe Earl could do something for the guys back at the mansion.