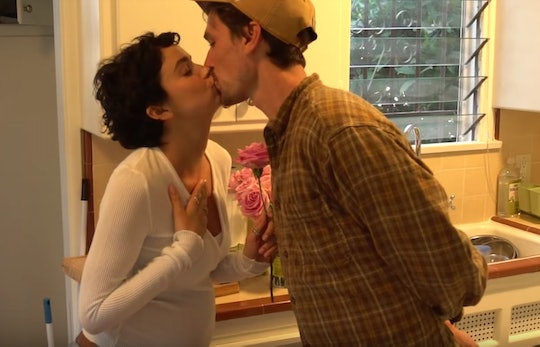 With the end of this season of ABC's Bachelor In Paradise, there have been a lot of exciting things to come out of Bachelor Nation. But no one was prepared for one bombshell to be dropped — Bekah Martinez, who competed on Season 22 of The Bachelor, announced that she and her boyfriend, Grayston Leonard, are expecting their first child together. This has led many people to ask — who is Grayston Leonard? Fans of The Bachelor might be unfamiliar with him, because Martinez's partner isn't from the franchise.

Martinez and Leonard announced their very exciting news with a YouTube video on Wednesday, in which they shared all of the feelings and emotions they went through after finding out Martinez is pregnant. In the video, you can see how much Martinez and Leonard care for one another and how happy they are to welcome their first child together in the near future.

But after watching this video, fans definitely have to be wondering about Leonard and how he and Martinez began this incredible journey — and luckily they don't have to search too far. Leonard is a 29-year-old rock climber and instructor, who is opening his own "bouldering facility" in Long Beach, California, in January 2019, according to his Instagram profile. Leonard and Martinez have only been dating for seven months, according to PureWow, but the couple is currently living together.

Another thing to know about Leonard? He is clearly in love with Martinez — just look at how cute they are together.

And if fans have been following Leonard on his Instagram account or inactive Twitter account, then they know he has a big sense of humor, especially when it comes to dating someone who is in the public eye.

At first, it was really casual and we were just doing a lot of fun stuff together, and then it just progressed to something deeper. We do a lot together; we climb, we went to Utah together on a climbing trip a couple of months ago. We both met each other's parents, so it's definitely getting really serious now.

And unlike the Bachelor who she was competing for, Martinez revealed that Leonard is "different from most men." Martinez told PureWow that the dad-to-be "has a curiosity about the world and a zest for life."

Perhaps what makes Leonard different is that he had no idea who Martinez was before meeting her — which is rare, considering most relationships from the Bachelor franchise are brought together because of The Bachelor, according to People.

Martinez explained in their pregnancy announcement that Leonard was "fine" with her "fame" although he might have underestimated it at first. And in spite of the fact that they started dating while Martinez's season of The Bachelor was airing, Leonard refuses to watch the show. Martinez told People in the beginning of August:

His friends were like "Dude, are you gonna watch it?" And he was like, "No, I don't want the show affecting my opinion of who I know her to be."

Now that he is going to be a father for the first time, Martinez told PureWow that Leonard is super excited about her pregnancy. "He's been really into finding resources and reading books about pregnancy," Martinez said.

Although members of the Bachelor nation might not have been familiar with Leonard a few months ago, rest assured that they will get to know him a lot better throughout Martinez's pregnancy and when her baby arrives.