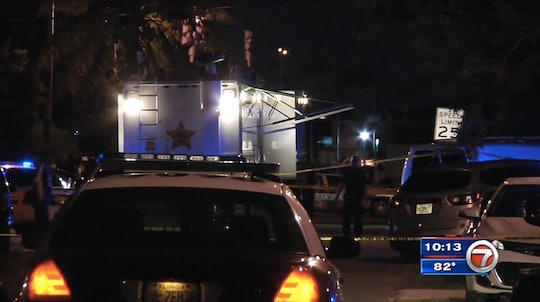 Who Is Gregory Frazier? He Was Shot By Police For This Questionable Reason

According to The Washington Post's "Fatal Force" database of police shootings in the United States, 675 people have been shot and killed by police officers in 2016. Of those, 23 percent of those fatal officer shootings have been black men. On Friday, Gregory Frazier became yet another statistic of fatal officer involved shootings. Who is Gregory Frazier? He was certainly more than just a statistic in a database, and the reason for his death is now raising questions in the public sphere.

On Friday, two deputies from the Broward County Sheriff's Office responded to a domestic disturbance call in Pompano Beach, Florida. Frazier's sister, Deborah, called 911 after Frazier allegedly began arguing with his niece, Deborah's daughter; she claimed that Frazier was holding a Swiss Army style knife during the altercation, but no one was injured. By the time police arrived, however, the altercation had already ended. Frazier was allegedly sitting outside in his own backyard, and according to witnesses at the scene, was eating chicken wings. The two officers ordered Frazier to get on the ground, to which Frazier responded, "Leave me alone."

Those were likely the last words Frazier spoke as the two officers opened fire on the 56-year-old man, then placing him in handcuffs. They removed the handcuffs when it became apparent Frazier was unresponsive. When asked for comment, the Broward County Sheriff's Office directed Romper to its official account of the incident, which in part read,

Just before 10 p.m., deputies were dispatched to 320 N.W. 14 St. regarding a domestic disturbance call involving a man armed with a knife. When deputies arrived, someone in the house directed them to the backyard where they encountered the subject who produced a knife. Both deputies fired their weapons. Per BSO policy, they were placed on administrative leave. Pompano Beach Fire Rescue responded, and pronounced the adult male dead at the scene.

Activists on social media have already linked Frazier's death to the #BlackLivesMatter movement, noting that yet another black man has been killed by police in the United States, a problem that even President Barack Obama has acknowledged is nearing endemic levels. Following the deaths of two black men at the gun-wielding hands of police officers in Louisiana and Minnesota in July, President Obama said of office involved shootings in a press conference:

These are not isolated incidents. They’re symptomatic of a broader set of racial disparities that exist in our criminal justice system. And I just want to give people a few statistics to try to put in context why emotions are so raw around these issues. According to various studies, not just one, but a wide range of studies that have been carried out over a number of years, African Americans are 30 percent more likely than whites to be pulled over... Last year African Americans were shot by police at more than twice the rate of whites.

Frazier's sister said she regretted the decision to call police at all. Speaking to the New Times Broward-Palm Beach, Deborah claimed, "I never would have called the cops if I'd known this was going to happen. They just came in and started shooting right away."

The identities of the two officers involved in the shooting have not been made public by the Broward County Sheriff's Office. They have reportedly been placed on administrative leave while the office investigates the shooting.