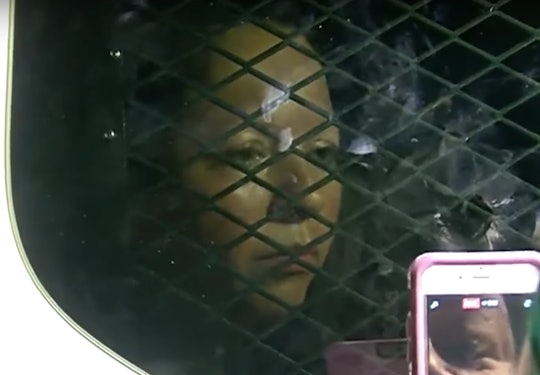 A Mother Of 2 Was Just Deported To Mexico

On Thursday, U.S. immigration officials deported a Phoenix-area mother of two to her native Mexico, a country that has not been home to her for more than two decades. Her family joined the protesters demonstrating against her fate; several were arrested. And activists who want the the world to know who Guadalupe García de Rayos is are counting her as among the first victims (or even the very first) of President Donald Trump's unforgiving stance on undocumented immigration — and the federal government's resulting diminished regard for the families and lives that these undocumented people have built here. Rayos' case is not only a tragedy for her, her family, and her community, but it's also a political flashpoint.

The 35-year-old knew there was a chance that she would be deported when she opted to attend her annual meeting with agents at Immigration Customs and Enforcement Wednesday, a requirement stemming from an old felony conviction (keep reading, it was a nonviolent crime). An immigrants' rights group had even advised her to skip it and to go into hiding, The New York Times reported. But, saying "I have faith in God" and trying not to cry, she went in anyhow. It was a brave move that sparked the protests, the anguish of her teenage son and daughter and her husband, who is also undocumented, and renewed nationwide outrage over the terms of Trump's sweeping Jan. 25 immigration order. The controversial executive action prioritized the deportations of undocumented immigrants with any criminal record.

Rayos, who crossed the border to escape her poor district in Mexico when she was just 14, does have a criminal record — but she's not violent; she's not a threat to national security, and she's not affiliated with any criminal gangs, which is why removing her from the country wasn't at the top of the to-do list when President Barack Obama was in office. Instead, Rayos was arrested in 2008 for using a fake social security number in order to be able to work. She was ordered to self-deport in 2013, but has been checking in with ICE each year since the incident, for which she was incarcerated for a total of six months. Until now, ICE had not forced her to go back to her country because her case was considered a low priority.

Asked what she would want the president to know about her mother, Jaqueline, who is a U.S. citizen, was direct. "I'd ask him 'why he would want to take her from me?'" the 14-year-old told an ABC News affiliate in Arizona. "She hasn't done anything wrong and I'm not scared of him."

According to NPR, the raid of the water park where Rayos was working when she was originally arrested in 2008 has been challenged as unconstitutional, a case that is still being litigated in the courts. If the legal system failed her in that case, she had another unlucky break more recently. Upworthy reported that she missed qualifying for president Obama's Deferred Action for Childhood Arrivals program, which allows those who came to the country as minors to register with the government to avoid deportation, by just a few months based on her age when she came to the country.

"It's extremely disappointing to walk in with a beautiful loving and caring human being like Guadalupe and not be able to walk out with her," said Rayos' attorney, Ybarra Maldonado, of the experience of accompanying her to the ICE meeting, according to the ABC affiliate. "She is stronger than I am, when she heard she was going to be taken in, she took a deep breath asked what the next step that would happen and she went into custody."

The Rayos case seems to lay out a blueprint for how deportations will work under Trump. For the families like the Rayos family, which is made up of two undocumented parents and two kids who are American citizens, it presents the terrifying prospect of being ripped apart at any moment.