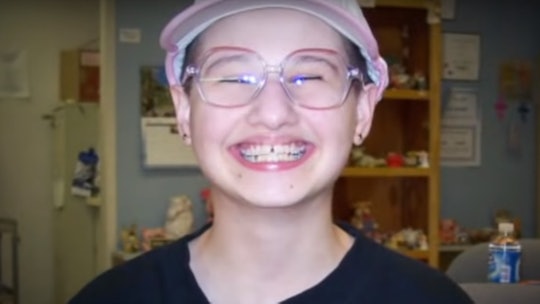 Ever since Hulu released The Act in March 2019, there has been a renewed interest in the murder case involving Dee Dee Blanchard, Gypsy Rose Blanchard, and Gypsy's now ex-boyfriend, Nick Godejohn. The deeply disturbing story follows the life of Gypsy, who was led to believe that she suffered from a plethora of medical conditions. And after suffering in silence for years, Dee Dee was murdered, and both Godejohn and Gypsy went to prison for her killing. In light of recent news, though, plenty of people who have been following this story are probably wondering: Who is Gypsy Rose's fiancé? As it turns out, the first photo of her mystery love interest has surfaced.

As you might already know, Gypsy Rose is currently serving a 10-year prison sentence after pleading guilty to second-degree murder in the 2015 stabbing death of her mother, Dee Dee, according to Inside Edition. Her now ex-boyfriend, Godejohn, was convicted of first-degree murder and sentenced to life in prison without parole, according to The Wrap.

As curious as it might seem, Blanchard has managed to find love while behind bars. That's because in April, it was revealed that Gypsy is currently engaged. "She’s 27 years old, she deserves to be in love and she deserves to have somebody who cares about her," a family friend, Fancy Macelli, told People at the time. “They are very happy. You can hear excitement in her voice.”

Although the man's name wasn't revealed, it did come to light that the pair met as pen pals and that they had known one another for more than a year.

Not much was known about Gypsy's love interest at the time, but new information has come to light regarding her mystery fiancé. For starters, his name is Ken, Macellia revealed to E! News. "Gypsy's family and her future husband Ken met in person for the first time in March," the family friend shared. "Gypsy and Ken are making plans to build a life together once she is released."

The first photo of Ken was also shared with E! News, and he is pictured posing alongside Gypsy, her father, Rod Blanchard, and her stepmother, Kristy, during what appears to be a prison visit. Other than the fact that his name is Ken, though, there isn't any other information available about the identity of Gypsy's fiancé.

Gypsy and Ken reportedly plan on waiting until she is released from prison to tie the knot. She'll be eligible for parole in 2024, just before she turns 33, according to Refinery29.

For the time being, Ken and Blanchard keep in touch through regular phone calls and visits when they're able to, according to Cosmopolitan. Gypsy wears a temporary engagement ring for now, but they supposedly have plans to pick out a real one once she's out of prison.

I'm not going to lie: I've been just as captivated by the story of Gypsy Rose Blanchard as anyone, and I'm curious to learn more about her fiancé, Ken, in the months to come.