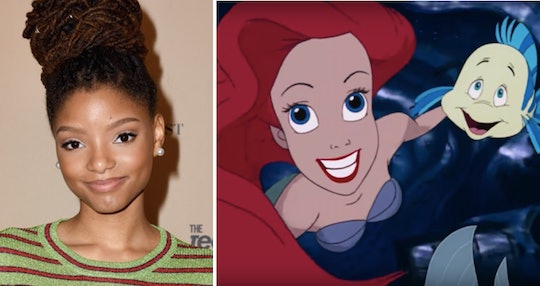 5 Facts About Halle Bailey, The Star Behind Ariel In The Live-Action 'Little Mermaid'

The Little Mermaid is returning to the big screen and Disney fans, to put it mildly, are just thrilled. Making matters even more exciting, Disney recently announced that it had found its new Ariel, so you may be wondering who exactly is Halle Bailey, the 19-year-old musician and actor who will soon be BFFs with Flounder and Sebastian.

While the announcement that Bailey had landed the incredible role certainly excited fans, unfortunately, not everyone was pleased. Some critics felt Halle wasn't the right choice for the role because of writer Hans Christian Andersen's Nordic roots, according to The Root, and wasted no time making it known on social media. Over the weekend, "#NotMyAriel" was trending on social media with naysayers suggesting it wasn't true to the story to have a woman of color portray Ariel.

Fortunately, Bailey's had plenty of support from fans and celebrities, however, including Jodi Benson who voiced the original Ariel, according to Entertainment Weekly, saying: "I think that the spirit of a character is what really matters. What you bring to the table in a character as far as their heart, and their spirit, is what really counts."

And Disney's Freeform also clapped back at the criticism in a lengthy and perfect Instagram post addressed to "the Poor, Unfortunate Souls," writing in part:

Yes. The original author of 'The Little Mermaid' was Danish. Ariel...is a mermaid. She lives in an underwater kingdom in international waters and can legit swim wherever she wants (even though that often upsets King Triton, absolute zaddy). But for the sake of argument, let's say that Ariel, too, is Danish. Danish mermaids can be black because Danish *people* can be black... So after all this is said and done, and you still cannot get past the idea that choosing the incredible, sensational, highly-talented, gorgeous Halle Bailey is anything other than the INSPIRED casting that it is because she "doesn't look like the cartoon one," oh boy, do I have some news for you...about you," Freeform said in its statement.

As for Bailey, after news broke, she simply posted an image of Ariel on Instagram with the caption: "dream come true..."

Beyond all of the criticism and the response to the criticism, it's clear that Bailey is a talented actress and will undoubtedly wow Disney fans with her take on Ariel. But before that happens, let's get to know the rising star a bit better with these interesting and fun facts.