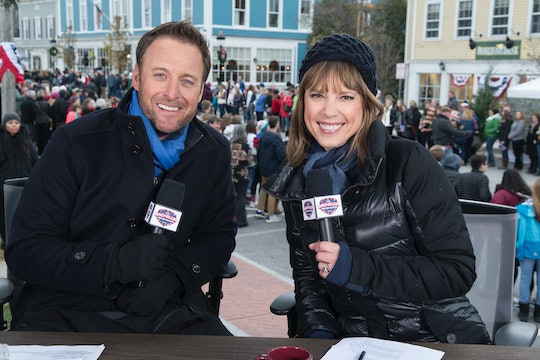 'The Bachelor Winter Games' Has Recruited A Trailblazer in Female Sportscasting

The Bachelor Winter Games has a full slate of international and domestic Bachelor franchise contestants gearing up to slalom their way into each other's hearts at full speed. Joining Chris Harrison at the helm will be fellow commentators Hannah Storm and Ashley Brewer, to provide that trademark sports announcer banter. So who is Hannah Storm on The Bachelor Winter Games? The ESPN anchor will lend some much-needed sports authority to the commentator lineup.

The new spinoff marries competitive winter sports with a Bachelor in Paradise vibe, hoping that love will blossom at the chalet. Ben Higgins, Dean Unglert, Eric Bigger, Josiah Graham, Luke Pell, and Ashley Iaconetti are some of the more recognizable fan favorites who will appear on Team USA, while competitors from the Canadian, Australian, Swiss and German, New Zealander, Finnish, British, Swedish, Japanese, and Chinese versions of The Bachelor/Bachelorette represent their respective countries. As you can imagine, there will be language barriers, and ~hijinks ensue~.

For the contestants, winning one of the challenges — which run the gambit from winter biathlon to ice dancing — means collecting a date card at the end of the night. Over the course of four episodes, contestants will do their best to pair off lest they be left rose-free at the end of an episode and sent home.

Storm has over three decades of sportscasting experience under her belt and, for all its flaws, major props to The Bachelor franchise for casting two female sportscasters alongside Chris Harrison (who I assume knows very little about ice dancing to begin with). Storm first began sportscasting in the mid-1980s on a rock radio station in Houston and eventually worked her way up to hosting the Houston Rockets and Houston Astros halftime and post-game shows. From there, she worked a brief stint as a weekend sports anchor for a local TV station in Charlotte, and then moved onto the national stage to work at CNN, NBC, and CBS, blazing trails all the way. She was CNN Sports Tonight's first female host, the first woman to host a network sports package solo (NBC's Major League Baseball games), and the first play-by-play announcer for the WNBA.

Storm went on to cover hard news and pop culture as a co-host of The Early Show on CBS, before finally making her way to ESPN. She's a morning anchor on SportsCenter and has gone on to cover Wimbledon, the NBA Finals, and the Olympics. Needless to say, Storm is more than capable of covering The Bachelor Winter Games with authority. She also famously dunked on her ESPN colleague Tony Kornheiser in 2010 after he made a remark on his radio show saying that her outfit looked like "a sausage casing." He was suspended by ESPN for two weeks.

Storm has penned two books: one on raising daughters to participate in sports called Go Girl, and another reflecting on her time studying journalism at Notre Dame called Notre Dame Inspirations. She seems like the perfect choice to cover the intersection of sports and The Bachelor in a way that feels empowering to and respectful of women, even in spite of the show's admittedly silly premise.

The show will air four episodes over the course of two weeks, trying its very best to compete with primetime coverage of the 2018 Winter Olympics airing on NBC. It's unusual for other networks to try and compete with the Olympics in such a direct way, but if anyone is here for it, it's Bachelor Nation.