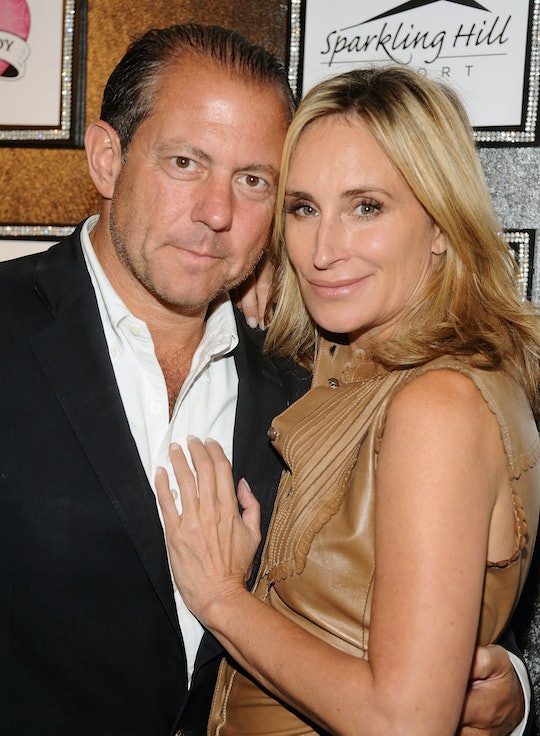 Harry Dubin Makes A Comeback On Season 11 of 'RHONY'

As Harry Dubin's Twitter bio aptly puts it, he's a "real estate developer and unintentional star of Bravo's Real Housewives of New York City." But RHONY fans who have watched this guy seduce (or divorce) Housewife after Housewife may be wondering who Harry Dubin is exactly, and what his seemingly magical romantic power over the Real Housewives is all about.

Harry is memorably once divorced from former Housewife Aviva Drescher (with whom he shares a teenage son), while also being romantically linked to Sonja Morgan (to whom he gave a very engagement-style looking ring a few seasons back), Luann De Lesseps (over whom Sonja dumped him when he went home with Luann immediately after offering Sonja that ring), and Ramona Singer. All the ladies seem extremely over Harry at this point, but when he appears at an event of Ramona's on the May 29 episode of RHONY, the other Housewives understandably get a little prickly.

It seems like Harry and Ramona have the closest relationship out of the bunch, and last December, he was even photographed kissing her at Pomona. Harry swiftly made the rounds to set the record straight and insist it wasn't what it looked like.

"She is a wonderful person," Harry added of Ramona, saying, "She is an amazing person, a great friend of mine—and that's it. We're not dating."

That may be true, but in a June 2017 appearance on Watch What Happens Live, Ramona explained what all the ladies find so irresistible about Harry, saying, "He's extremely charming and personable and fun to be with. And he's kind-hearted and warm and generous."

So they may not be dating, but it seems clear Harry and Ramona are deeply fond of each other. And also, look, who among us doesn't have that one friend who's hooked up with all of our friends, with whom we also have great chemistry, but would frankly be embarrassed to date because of their lack of discernment for hookup partners? No one.

Harry does have a connection with one other Housewife, but she's made adamantly clear that she "wouldn't touch him with a ten-foot pole." He and Tinsley Mortimer go way back to before she was even on the show, and she met him through, you guessed it, another RHONY alum.

Tinsley admitted in a Season 9 episode that she "met Harry Dubin when he was hanging out with Kelly Bensimon in Miami." In fact, Tinsley was there with Harry and Ramona on the night of their smooch in December, which, funnily enough, took place right after Ramona's birthday party in November — the event that airs on the May 29 episode. So maybe the ladies had a tiny right to be miffed that Harry was hanging around, considering how close he and Ramona got just a few weeks later. Ultimately, however, Harry Dubin is likely to be a RHONY staple for as long as Real Housewives are densely populated on the Upper East Side.