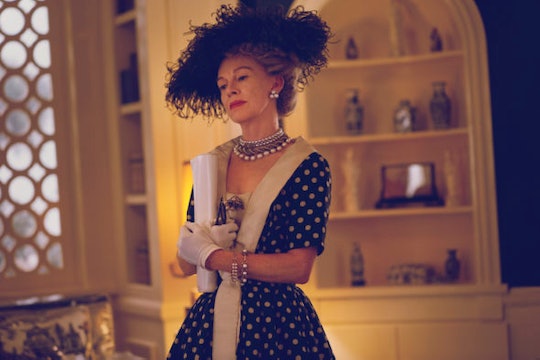 Ryan Murphy is bringing the story of Joan Crawford and Bette Davis' lifelong rivalry to FX in the first season of his new anthologized series Feud. The eight-episode installment takes place during the filming of Crawford and Davis' single collaborative project, Whatever Happened To Baby Jane?, a late attempt for them both to resurrect their careers. Naturally, the well-known fact of their longstanding beef fueled publicity for the movie and at the heart of that publicity was Hedda Hopper. So who is Hedda Hopper on Feud? Two-time Oscar nominee Judy Davis tackles the role of the era's preeminent gossip columnist, who expertly needled the two actresses into giving mean quotes about each other to the press.

In real life, Hopper, too, was well-known for a longstanding rivalry between herself and Louella Parsons, known as "America's first movie columnist" until her rival came along. Hopper tried and failed to make it as a chorus girl on Broadway, enjoying more success on the road in touring theatrical productions. Eventually, she managed to break into the film business and enjoyed a period of on-screen success during the 1920s. But in the 1930s, her film career died down and so she began to write a gossip column. This coincided with the beginnings of Crawford and Davis' rivalry, positioning Hopper in the right place at the right time to document one of the most famous feuds in cinema.

Baby Jane was made in 1962, long after the heyday of both Crawford and Davis' careers. In spite of their decades-long feud at that point, they came together to try and use that animosity to spark interest in the film. Hopper famously invited both women over to a dinner party at her house right before they were scheduled to begin filming. She was to write a piece about what The LA Times called a "truce meal."

At the dinner, the two actresses mostly got along, bonding over the scarcity of roles for women their age, which is what drove them to fiercely lobby studios at the time to make Whatever Happened To Baby Jane? with the two of them. But on set, tensions flared. Feud revisits the memorable filming of a fight scene in which Crawford was so afraid of Davis that she requested a body double to shoot the scene in her place. But Crawford had to stand in for one close-up sequence, in which Davis took an opportunity to reportedly kick her in the head for real. (Davis denied it was as serious as Crawford made it look.)

Ultimately, the miniseries is an interesting look at a problem that persists in the film industry today, albeit with all the unhelpful sniping that reinforces the problem. You can catch Feud when it premieres on March 5 at 10 p.m. ET on FX.