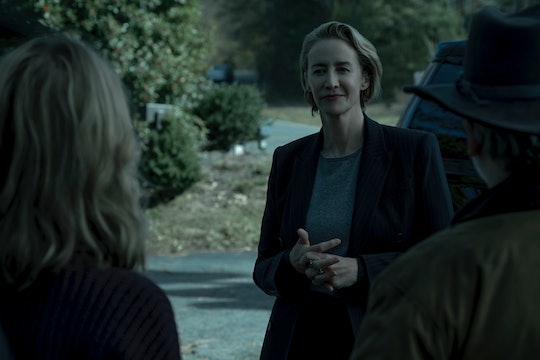 In Season 1 of Ozark, Marty Byrde and his family were forced into a life of crime, and on the new season, they’re still struggling to keep the Snells, the Langmores, and the FBI at bay. But there’s a new shark circling their waters this season — Helen Pierce — and it looks like she's going to give Marty a run for his laundered money. But exactly who is Helen Pierce on Ozark Season 2?

Helen Pierce (Janet McTeer) is the Mexican drug cartel’s attorney, and she is in the Ozarks to make sure that Marty (Jason Bateman) launders her client's money correctly. At the end of Season 1, Darlene Snell (Lisa Emery) shot and killed the cartel’s top lieutenant Del (Esai Morales), after he agreed to a deal with them to sell their heroine and build a casino. When the cartel couldn’t get in touch with Del, they sent Helen to check in on the 50 million dollar situation.

But Helen is no average attorney, and she’s there to make sure Marty and the Snells live up to their end of the deal. In the first episode of Season 2, she seems skeptical of the casino plans, but coolly reminds Marty of what’s at stake. “They’ll kill your children. They’ll gut your f*ng wife. Do you want me to tell you what they’ll do to you?”

Marty and his wife, Wendy (Laura Linney) have been working nonstop to get the cartel’s money laundered, and in Season 1, that attracted the attention of two local crime families, the Snells and the Langmores. Ruth Langmore (Julia Garner) eventually found a place working alongside Marty at his strip club, but now that her father Cade (Trevor Long) is out of jail, he may try to throw a wrench in the whole casino operation. But with a shark like Helen around, messing with the cartel’s money won’t be easy.

On the show, Helen Pierce is played by British actress Janet McTeer, who was last seen playing Alisa Jones on Season 2 of Netflix’s Jessica Jones. In an interview with Collider, Mcteer talked about what drew her Ozark and to the role of Helen Pierce. “It seemed like a nice follow-up to Jessica Jones, and I just really liked the first season,” said McTeer. “I really, really liked the writing and I think all of the actors are fantastic. It just seemed like a great gig to join.”

McTeer has been in critically acclaimed films for over two decades, and alongside her numerous Academy Award nominations, Tony Awards, and Olivier Awards, she earned a Golden Globe Award for her portrayal of Mary Jo Walker in the 1999 movie Tumbleweeds. In Jessica Jones, McTeer’s role was of a fierce, protective mother, similar to her role as Helen Pierce, and she told Collider that she found her dark and dramatic character to be intriguing. “I wasn’t sure how I would fit in, but then I watched and realized that it was embracing the darker side of everything, and I found it really fascinating and interesting.”

In the same interview, McTeer also described her time on the Ozark set, how it differed from her experience on Jessica Jones, and how much she enjoyed working alongside Bateman and Linney. “It’s a very, very friendly set. It’s a completely different type of intensity than Jessica Jones, with a different style of shooting,” she told the outlet. “It’s much more character-driven and dialogue-driven, and it’s shot in a different way that’s much more gritty. It’s a whole different ball game.”

On the second season of Ozark, the stakes just keep getting higher. And as if the Byrd family didn’t already have enough on their plate, the addition of Helen is sure to make their lives even more complicated. Season 2 of Ozark will premiere with ten new episodes on Netflix on Friday, August 31.