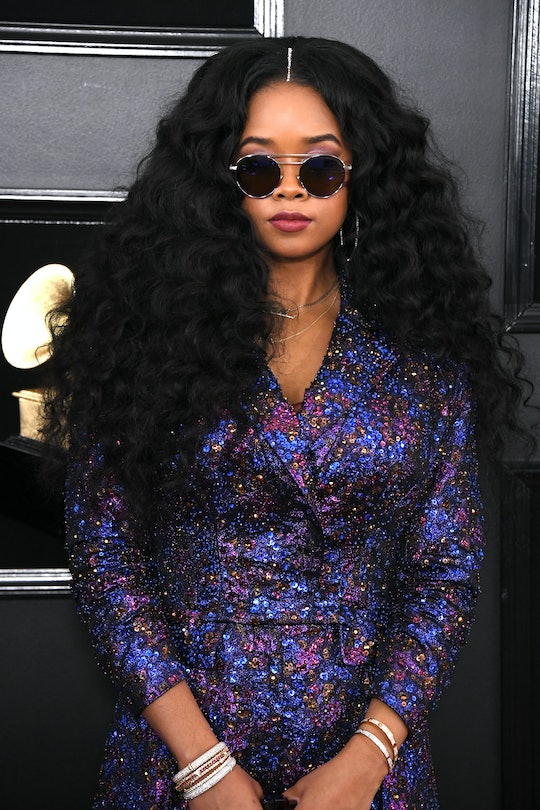 Meet H.E.R., The Talented Artist Who Won Best R&B Album At The 2019 Grammys

At the 61st annual Grammy Awards, one singer's win had everyone talking. After taking the stage with a truly epic performance that included her shredding on a clear electric guitar, H.E.R. was named the winner of this year's Best R&B Album at the 2019 Grammys. But if you're hearing about this talented artist for the first time, here's everything you need to know about who H.E.R. is and how she's gotten to this incredible milestone in her career.

The 21-year-old artist, whose real name is Gabi Wilson, according to Vulture, was one of this year's Grammys' "biggest surprise" nominees, as she's owned a rather "elusive" persona over the years and not many people may have known of her before Sunday night. But as Billboard pointed out, following her performance of her song "Hard Place" at the Grammy, it wouldn't be surprising if her downloads on iTunes skyrocketed and the number of her Instagram followers climbed.

Despite her relatively young age, H.E.R. has actually been in the music industry for several years. In 2014, she was signed to her first label and released a single "Something To Prove," the only one done under her real name, according to Forbes.

In the years since, H.E.R. has made waves with her stage name persona, specifically insisting on being mysterious within the industry and during press events while promoting her album in 2016, according to Vulture.

But why the anonymity? As she told the Los Angeles Times in 2016 about the release of her new album at the time, "The mystery is a metaphor for who I am, or who I was at the time of creating the project... I feel like oftentimes we don't like to be open as people about our emotions or things that we are going through. At the time [of recording], I was very closed off except for when I was writing or when I was in the studio."

These days though, H.E.R. — which stands for Having Everything Revealed, as she told the Los Angeles Times — is certainly more well known. At the BET Awards last summer, for instance, H.E.R. and fellow R&B star Daniel Caesar performed together, which was a surprise and delight for viewers since she "often shuns the spotlight," according to Billboard.

And on Sunday, she took the stage more than once during her Grammys debut.

But before she rose to fame, H.E.R. had performed on The View when she was young, according to Rolling Stone, as well as on the TODAY show in 2007 when she performed Alicia Key's "No One."

If you haven't heard much of her music before, iTunes reviewed it as "so intimate and revealing that it feels like reading someone's diary" and listeners will feel like they've been thrown "into the thick of a messy breakup and all its tension." If you're intrigued, head over to her YouTube channel and have a listen of her tracks.

Taking home a Grammy will certainly boost any artist's career, and it certainly seems like this is far from the last time we hear about H.E.R.'s and vulnerable and impressive work.