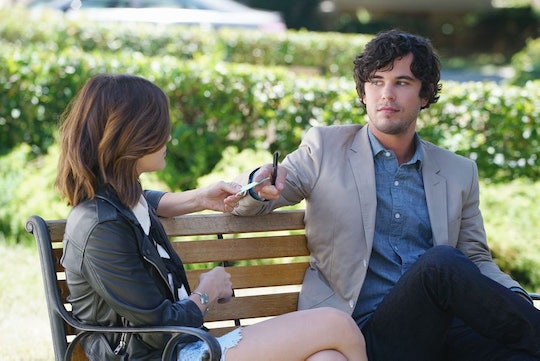 Holden & Aria Have A Past On 'PLL'

The second half of the final season of Pretty Little Liars has begun and with the premiere episode came a familiar face. Aria's old friend Holden Strauss made a reappearance on the show, but some fans are wondering who is Holden on Pretty Little Liars? To be fair, Holden hasn't been on the show since Season 3, so it's understandable that some may not remember him. Here's what you need to know.

Holden is an old childhood friend of Aria's who first appeared in Season 2 when his family returned to Rosewood after his father did a year-long sabbatical in Portugal. Holden has an abdominal aortic aneurysm, which is why his parents forbid him from doing martial arts, however, Holden wanted to do it anyway. So after he and Aria went on a date, and it became clear to Holden that she wasn't actually interested in him, he decided to use the situation to his advantage. Their pretend dates were used as cover-ups for what they were really up to (Aria seeing Ezra and him doing martial arts, though Aria was initially unaware of his extracurricular activity at first).

The arrangement worked for a while, but then one day Aria noticed a huge bruise on Holden's side. When she questioned him about it, though, he brushed it off as no big deal. Later, she saw a bag of pills come out of his bag, which led him to finally confess to her that he was doing martial arts, but didn't tell her the real reason why he was doing so in secret. It was Aria's mom who ended up telling her about Holden's heart condition and though Aria understood that he had a passion for the activity, their little arrangement went by the wayside and they kinda stopped hanging out after that. Holden didn't appear again until Season 3.

Emily ran into Holden at a volunteer party and noticed he had a tattoo similiar to the one she saw in a flashback she had from the night she ended up at Ali's grave. Turned out, it was a stamp from a party, which changes location pretty frequently and was a common hangout place for Maya. Emily later had another flashback of what looked like the back of Holden's head but that was never brought up again.

Jump forward to Season 7 and Holden has returned once again. Leaving behind his world of martial arts, Holden is now a chef for a wedding venue his sister (did anyone know he had a sister?) owns. He and Aria hit it off right away, once again, and it looks like Holden may be sticking around for a while. He may even be there until the very end.

Holden's sudden reappearance naturally has fans suspicious and many can't help but wonder if he's somehow connected to A.D. Viewers will just have to keep watching to find out.