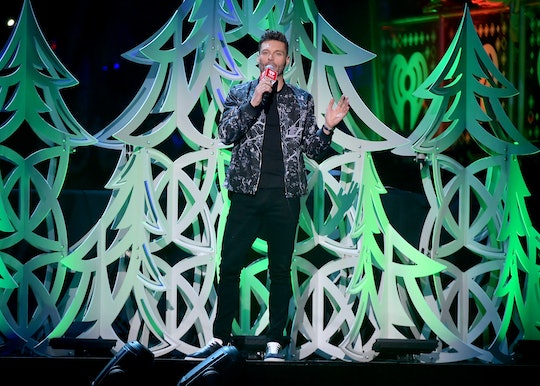 Dick Clark's New Year's Rockin' Eve has been a staple of the end of the year for decades. Viewers ring in the new year with a series of musical performances that culminate in that final countdown while the ball drops in Times Square. But the show has changed with time. After Clark pulled back on hosting duties due to his health, someone else had to pick up the mantle. So who is hosting New Year's Rockin' Eve?

Ryan Seacrest has been hosting the show since 2006 and will be hosting once again this year. Clark appeared on the show sporadically after suffering a stroke in 2004, at which point Regis Philbin took over; Clark returned in 2006 with Seacrest as his co-host, but after that Seacrest began to handle things on his own. The show was eventually renamed Dick Clark's New Year's Rockin' Eve with Ryan Seacrest. Clark passed away in 2012, a few months after he appeared in the show's 40th anniversary special.

Though Seacrest has been the host for 13 years now, he will have a little help ushering in 2019. According to Billboard, Jenny McCarthy, Lucy Hale, and Ciara will all play a part in the New Year's Eve hosting duties. McCarthy will report from Time Square while Hale presents the Central Time Zone countdown in New Orleans and Ciara hosts the Hollywood Party on the West Coast.

New Year's Rockin' Eve will be a lengthy affair that spans several hours on ABC on Dec. 31. The festivities begin at 8 p.m. ET and continue until after midnight, with one half-hour break for Eyewitness News at 11 p.m. After the news has finished, you can settle in until the countdown. And there are plenty of performances to fill those four or five hours.

Seacrest announced part of the lineup back in November of this year by posting the list to Twitter. He revealed that Foster The People, the Chainsmokers, Charlie Puth, Kelsea Ballerini, Dua Lip, Ella Mai, and Macklemore and Skylar Grey would all be taking part in the Hollywood Party. But, he said, that didn't even "scratch the surface."

More information emerged soon enough, courtesy of Billboard's interview with executive producer Mark Bracco. The New York City lineup includes Shawn Mendes, Camila Cabello, Dua Lipa, and New Kids on the Block, with Christina Aguilera headlining the show. Bracco seemed especially excited about Aguilera's performance, which would be a medley of her greatest hits. She took to the stage back in 2007 and now she's returning more than a decade later.

Bracco also spoke about how important it was for them to continue honoring Clark even now that Seacrest was the host. "I watched Dick Clark's New Year's Rockin' Eve as a kid on the couch, with my family," he said. "Whether you're celebrating at a big party, or with your family at home, everyone watches it because it is an American tradition." That was why they kept Clark's name in the title. Maintaining that sense of tradition is an important aspect of the annual celebration.

And now Seacrest will be carrying that tradition into the new year.