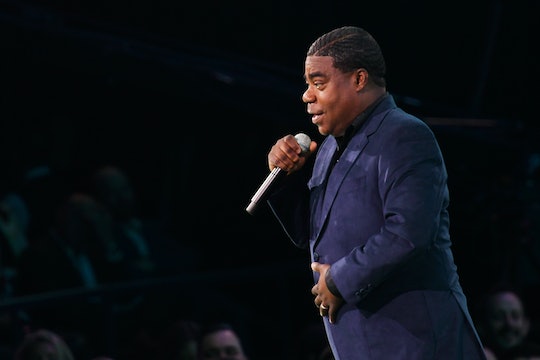 In just a couple days, sports fans of all stripes will gather for the annual celebration of the best of the athletic world in 2018. But who is going to head up the big bash this year? Well, you'll probably be delighted to hear that beloved comedian and actor Tracy Morgan is hosting the 2019 ESPY Awards, so prepare for a night of laughs and hopefully some pretty hilarious moments.

The ESPYS are scheduled for July 10 this year and will take place at the Microsoft Theater in Los Angeles, according to Entertainment Tonight, and fans can plan to catch it on ABC starting at 8 p.m. ET. Morgan announced the hosting gig on June 3 with a typically humorous post on his Instagram, of course. And once the news went live, according to The Hollywood Reporter, Morgan said in a statement: "I am very excited to be hosting The ESPYS. I hope my Uncle Sidney Poitier is there with my biological father Tony Dorsett and my second cousin Herschel Walker. And Bo Jackson I want my two dollars back!"

The executive producer of the ESPYS, Maura Mandt, gave her perspective on the choice. According to ESPN Press Room, she said in a statement: “Few people can own a room like Tracy Morgan, and I can’t wait to see what he has in store for the show.”

The ESPYS were launched in 1993 by ESPN and used to air on the network. In 2015, however, the awards show was moved to partner-station ABC in an attempt to pull more viewers, according to The Wrap. The same year the ESPYS were founded, coach Jim Valvano announced the creation of the V Foundation for cancer research, and proceeds from an auction, which is hosted by eBay every year, that precedes the awards show go to the foundation, according to The Hollywood Reporter. And it's been pretty successful over the years; as ESPN reported, the event has raised close to $97 million for the foundation.

This year’s auction includes an invitation to J Lo’s birthday party, tickets to the CMA awards, and the right to appear in a SportsCenter commercial. And a stay at the Cinderella Castle Suite at Disney is currently bid at $75,200. You can check out all of this year's auction items on ebay.com/ESPYS.

The real draw of the night is the athletes, of course, and as always, there are impressive names in the running for awards. Nobody should be surprised that Serena Williams is a candidate for best female tennis player, according to The Wrap, and Simone Biles is in the running for best female athlete, alongside Mikaela Shiffrin from the U.S. Ski Team, Breanna Stewart from the WNBA’s Seattle Storm and Alex Morgan of the U.S. Women’s Soccer Team. Winners are determined by fan votes, so you can go to the ESPYS' page right now to cast your votes.

Marine Corps veteran and above-the-knee amputee Kirstie Ennis will receive the Pat Tillman Award for Service this year, according to ESPN. Ennis founded the Kirstie Ennis Foundation to “provide education and opportunities in the outdoors and to support other nonprofits dedicated to improving the quality of life of individuals and families.”

All of these accomplishments will be celebrated by fans as well as the antics of a very funny host this year. Be sure to catch the ESPYS on ABC at 8 p.m. ET on Wednesday, July 10.