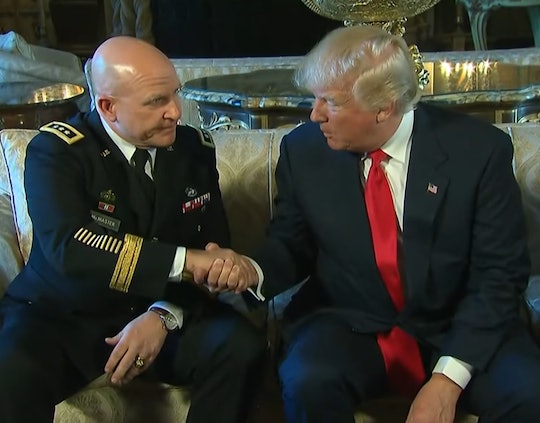 A key vacancy in President Donald Trump’s Cabinet has now been filled following the sudden dismissal of Michael Flynn as national security adviser after just 24 days on the job. Announced on Monday at his Mar-a-Lago estate in Florida, Trump has reportedly chosen Army Lt. Gen. H.R. McMaster as his next national security adviser. According to The New York Times, McMaster is a “widely respected military strategist” and is “seen as one of the Army’s leading intellectuals.” But those on the outside of the military realm might be wondering about McCaster’s background and beliefs as he’ll now be counseling the president on national security issues and military operations.

Most of the National Security Council’s members are career professionals with years of experience in the line of duty and McMaster also fits that criteria. The 54-year-old Army officer, who has been married since 1985 and has three daughters, has served in multiple wars — including the Persian Gulf War and the wars in Afghanistan and Iraq — and is currently the director of the Army Capabilities Integration Center and Deputy Commanding General, Futures at U.S. Army Training and Doctrine Command, according to Heavy.

"He is a man of tremendous talent and tremendous experience," Trump said of McMaster on Monday, according to CNN. "I watched and read a lot over the last two days. He is highly respected by everybody in the military, and we're very honored to have him."

While McMaster is certainly respected by many and is qualified for the post, Trump’s choice caught many by surprise. As Slate reported, McMaster “is known as someone who is fond of questioning authority having made his name as a strong critic of the military leadership during the Vietnam War.”

He even published a book on the matter entitled Dereliction of Duty, which criticized military officers’ strategies during the Vietnam War and President Lyndon B. Johnson and Secretary of Defense Robert McNamara for getting the United States involved in disastrous war.

McMaster has also been vocal about the cyber-terrorism threats against the United States and how the entire army needs to work together to combat it. He explained his views in a 2014 interview with The Ledger-Enquirer:

I think cyber-terrorism — espionage as we are learning — is a significant threat. The fact is the cyber-domain is a contested space every day already. The key question is, how does this fit into the overall problems of future war? I think the key thing for us is really going to be how we develop systems that are resilient, that are able to allow us to operate and communicate freely during operations. And then we have to learn how we disrupt enemy capabilities to affect us.

McMaster was reportedly not Trump's first choice as his new national security adviser. Last week, he offered the position to retired Vice Adm. Robert Harward, but he reportedly turned it down "amid concerns about how the White House was being run," according to CNN.

As The Atlantic put it, Trump got "an upgrade" with McMaster as he "is one of the most talented officers the U.S. Army has ever produced." At the moment, this selection is some of the better news to come from the Trump administration, but only time will tell how long these good vibes will last.