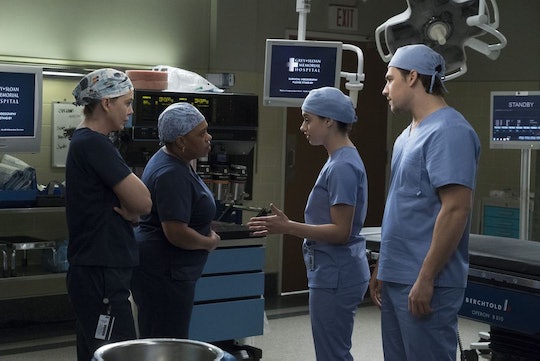 In the newest episode of Grey's Anatomy, the medical drama will tackle immigration. In the trailer and a sneak peek of Thursday's episode, it was revealed that the Immigration and Customs Enforcement, also known as ICE, is looking for one of the hospital's surgical interns. But, of course, fans have yet to find out who they're coming after. So who is ICE looking for on Grey's Anatomy? At this point, it could be anyone.

To first figure out who ICE is looking for, we have to first know who all the surgical interns are. Although there's been some highlights with this intern class, they're still fairly new characters to longtime Grey's watchers, so let's break them down. First, there's Dr. Sam Bello, who previously dated DeLuca, but now that she's working at the hospital, they've rekindled their previous relationship and she even asked him to move in with her.

Then there's Dr. Levi Schmitt, also known as Glasses and now Blood Bank. He became infamous around the hospital after he dropped his glasses inside a patient. Casey Parker is a memorable resident because not only did he turn out to be a genius hacker when the hospital was digitally under siege, but he also revealed to Dr. Bailey that he's transgender.

Along with those three is Dr. Dahlia Qadria, who you may recall took off her headscarf to help save a patient. Then there's Dr. Vikram Roy, who April slept with during her dark period. And lastly there's Dr. Taryn Helm, who is currently assisting Meredith and Jo on their surgical innovation contest.

So there you have it. Those are all the possible people ICE could be trying to track down. Unfortunately, fans haven't really learned enough about these characters to suspect which person it could be. Up to this point there's been no mention about anyone being an immigrant, much less an undocumented one. The only person that fans know for sure wasn't born in the U.S. is DeLuca, but he's a resident, not an intern.

Still, because of DeLuca, if I had to make an educated guess about who ICE is looking for, I'd go with Sam. These two have a long history together, something fans still haven't really learned more about, and perhaps these two connected in the past because of their shared immigration experience. While Sam doesn't have an accent or anything that would really indicate she's not an American-born citizen, neither do any of the other interns. Plus, E! Online has said the new episode will tackle DACA, which is for people who were brought to this country as a child. Thus, if Sam came here when she was young, it would explain the lack of an accent.

If Sam is the one ICE is looking for, this could definitely throw a wrench in her rekindled relationship with DeLuca. Will he try to step in to save her? It's definitely possible. If the two decide to marry, Sam won't be deported, however, it may be a little too late for that with ICE literally at her door. But it's also not impossible; the hospital does have a chapel after all. Wilder things have happened on Grey's than an impromptu wedding to avoid ICE.

However, if DeLuca and Sam decide not to go down that route, there may be some other options. Again, with ICE already coming for Sam that makes everything more complicated, but Sam may be able to get a work visa, especially since she works at such a renowned hospital with so many people of influence. Thus, I wouldn't give up hope just yet. Perhaps there is a way for Sam, or whoever it is ICE is looking for, to get out of this unscathed.