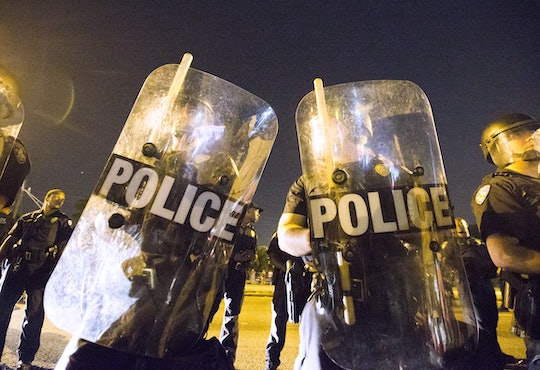 Who Is Ieshia Evans? The Activist's Powerful Arrest Photo Has Gone Viral

In one half of an instantly-iconic photo from a protest in Baton Rouge, a line of policemen in riot gear, looking like something out of a war movie, watch as two officers go to make an arrest. In the other half, a peaceful protestor stands calmly, her dress blowing about her feet. Focusing only on the latter, it seems inconceivable that the woman in the photo is about to be taken to jail, but moments after the picture was taken, the officers indeed placed her in handcuffs. The woman in the picture is Ieshia Evans, and her arrest photo has gone viral, capturing the recent upheaval in America over police brutality, and the power dynamics at play in a system that too often treats people of color as criminals.

Although the photo of Evans has now been seen by millions, she has not yet given an official interview, so reports about her are conflicting, with various outlets listing her age as either 28 or 35. According to The Daily Mail, she is a nurse and mother who lives in New York and has not protested before, but she was so disturbed by the recent death of Alton Sterling that she traveled to Baton Rouge to march for, in the words of a friend interviewed for the article, a "better future for her 5-year-old son."

On Saturday, Evans joined a group of protestors blocking the highway in front of the Baton Rouge police headquarters. Jonathan Bachman, the photographer who captured Evans's powerful protest for Reuters, told The Atlantic that the police came out in riot gear and managed to move almost everyone to the side of the road. He heard a woman say she was going to be arrested, and turned to see her in the road. He continued,

It happened quickly, but I could tell that she wasn’t going to move, and it seemed like she was making her stand. To me it seemed like: You’re going to have to come and get me... It wasn’t very violent. She didn’t say anything. She didn’t resist, and the police didn’t drag her off.

Evans spent the night in jail, but has since been released. Though she may be the most noticeable, Evans was only one of 132 people arrested over the weekend in Baton Rouge while protesting the allegedly excessive force used by police against those whom they have sworn to serve and protect.

Evans' bravery in fighting for what is right is an inspiration. Hopefully, this photo will raise awareness and understanding of the Black Lives Matter movement, so that all those who live in this country can begin to do the hard work of fixing America's broken and unfair systems.