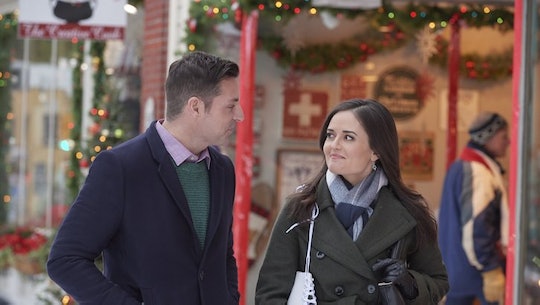 The 'Christmas At Grand Valley' Cast Is A Real *Wonder*

With only a few days left until Christmas, you probably have your holiday movie list nailed down. The Hallmark Channel makes it easy to hunker down for the weekend to get your last-minute movie fix with some of your favorite celebrities. One premiere coming up, Christmas at Grand Valley, promises to reunite two of the most beloved '80s characters in existence. So, who is in the cast of Christmas at Grand Valley? Get ready to break out your happy dance.

If you're dying of anticipation, I'm not going to make you wait another minute. The cast of Christmas at Grand Valley includes Danica McKellar, Brennon Elliot, and Dan Lauria. So why do the names sound so familiar? McKellar and Lauria starred together in the hit '80's show that offers a nostalgic look at the life of main protagonist, Kevin Arnold throughout the late '60s and early '70s, The Wonder Years. McKellar played Winnie Cooper — next door neighbor and source of infatuation to Kevin — and Lauria is known as Kevin's gruff dad, Jack Arnold. The two spent five years working together and this is the first time in 25 years they're on the same set for the same project. Talk about a magical reunion.

Though McKellar is most known for her role on The Wonder Years, some fans might also remember her as Elsie Snuffin on The West Wing, though she's had some other appearances on How I Met Your Mother, Big Bang Theory, and a slew of Hallmark and Lifetime movies. Acting aside, this girl can dance. She was a quarterfinalist on Season 18 of Dancing With the Stars. Hold up — I'm not finished. She's a summa cum laude graduate of UCLA with a degree in mathematics. According to the Hallmark website, "her theorem, since dubbed “The Chayes-McKellar-Winn Theorem,” was published in Britain’s esteemed Journal of Physics and has been featured on the front page of the science section of The New York Times." She's a bestselling author of Math Doesn't Suck, Kiss My Math, and Goodnight Numbers, along with three others. Basically, there's nothing she can't do so watch out.

McKellar's Christmas at Grand Valley cast mate, Elliot, has had roles in shows like Cold Case, UnREAL, and CSI, as well as a couple other Hallmark movies (for instance, All of My Heart: The Wedding, opposite Lacey Chabert). You can also catch him in movies like Night at the Museum: Secret of the Tomb and a ton of other Hallmark Movies & Mysteries original movies.

Lauria, a football player and graduate of Southern Connecticut State University, served as Captain in the U.S. Marines, including a tour of duty in Vietnam. Though known for The Wonder Years, the '90s were a time for hit made-for-TV-movies. Since then, he's been on nearly every show in existence. Seriously, look him up. some of which include Shameless, Pitch, Sullivan & Son, This Is Us, and more. He also starred in the leading role on Broadway's Lombardi.

Now that you know who's in Christmas at Grand Valley, you might want to know what it's about. Take a burnt-out artist from Chicago, send her back to her hometown during the holidays, add a single father to the mix and bam! — Christmas magic is guaranteed.