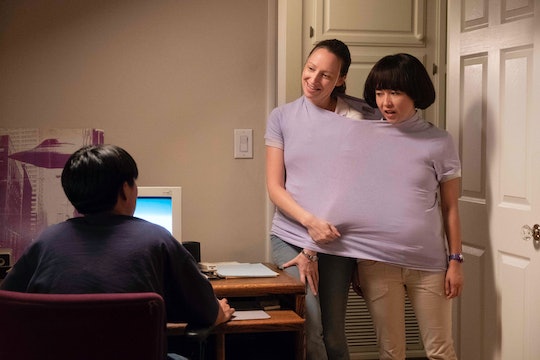 Hulu’s new comedy, Pen15, is taking viewers back to the 2000s junior high experience. The 10-episode series follow two 13-year-old best friends, Maya and Anna, who are starting seventh grade and find themselves navigating all the awkward, yet familiar milestones that come with adolescence. While they may look like teens on the show, the actresses playing Maya and Anna are actually 30-something adults. So, exactly who is in the cast Pen15?

Maya Erskine and Anna Konkle play 13-year-old versions of themselves in Pen15, and they’re not just the stars of the series, they’re also the co-creators. The adult comedy was created, written, and executive produced by Erskine, Konkle, and Sam Zvibleman, alongside executive producers Andy Samberg, Akiva Schaffer, Jorma Taccone of The Lonely Island. Erskine and Konkle are the only adults playing teens on the series, so the kids you see surrounding them are actual 13-year-olds.

If both Erskine and Konkle look familiar, it’s because they were featured in a number of popular TV shows over the years. Erskine had recurring roles on Insecure, Casual, and Betas and Konkle, who was a series regular on Rosewood, was also featured in popular shows like Shameless, New Girl, and Maron. In an interview with Vulture, the actresses revealed that they first met in their junior year of college, when they were studying experimental theater in Amsterdam for NYU’s Tisch School of the Arts. After graduation, the two moved to Los Angeles, and created their first web series, titled Project Reality, which inspired them to pursue writing and production along with acting.

When talking to Metro USA, the pair said that with Pen15, they wanted to explore playing 13-year-old versions of themselves, and tap into the middle school experience as it really happened. "We were aiming to try to be as authentic as possible in our portrayal of being 13," said Erskine. "That was always the goal because everything was so hyper-real when we were 13. We did everything we could to ground the show, the writing and our acting in reality as much as possible. So having real kids to play off of was really helpful for us."

Konkle told the outlet that at first, the kids they were shooting with on set didn’t quite understand the dynamic of the show, and initially assumed Erskine and Konkle were actual teenagers. "By the end of the shoot, I think they finally kind of got it, the 13-year-old actors," said Konkle. "Because in the beginning, when we were working with them I think they were still coming to terms with these older people who were trying to be like them. I don't think they really had any idea what they were getting into at first, but they were all so great about it."

No matter what age you are, you can relate to the over-dramatic meltdowns and weird periods of self-discovery that come with being a teen. Luckily, Erskine and Konkle found a hilarious way to bring back a generation of memories in Pen15, and those familiar throwbacks might make you feel like a kid again too.