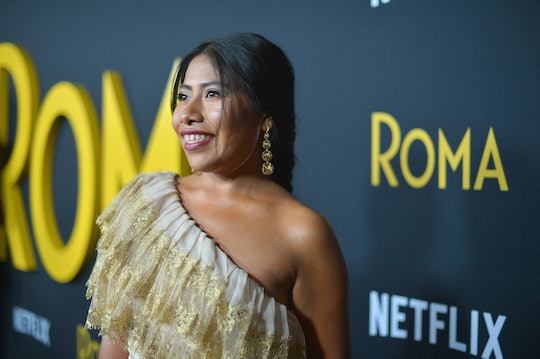 The 2018 film Roma is especially personal to its writer and director Alfonso Cuarón because it revisits the Mexico City of his childhood. Set in the 1970s, it follows Cleo, a housekeeper living with a middle-class family. The film has drawn positive attention from audiences and critics, with particular praise paid to its leading lady, who had never acted before. So who is in the cast of Roma?

One of the most surprising aspects of Roma's casting is that Aparicio was planning to be a kindergarten teacher before she was cast as Cleo. In fact, she never had any intention of becoming an actress. Cuarón based the character on his own childhood nanny Liboria "Libo" Rodriguez, so he was trying to find someone who resembled her. As Aparicio explained to Variety, that led his crew to reach out to indigenous communities in Mexico. One of his teams arrived in Aparcio's hometown Tlaxiaco in Oaxaca. But even then, Aparcio didn't seek out the part.

Instead, her sister heard about the casting call and decided to audition herself. Aparcio went along as support, but told Vulture that her sister got cold feet at the last minute. Aparcio auditioned in her stead and the process snowballed from there. But Aparcio said that actually getting the role was a "huge surprise." It was never her plan to land the lead part in an Oscar-winning director's next film. "I was just curious at every stage about the process," she said.

Though filming was sometimes daunting, Aparcio told Variety that Cuarón's trust in her "helped me imagine that this was my life." Though she still has a passion for teaching, she may continue to act in the future, if possible. She has some trepidation because every movie is different and every director works differently. She also felt she would need to take acting classes, though her first performance already has people speculating that she may earn a Best Actress nod at the Academy Awards — no acting classes necessary.

In fact, quite a few of Aparcio's cast members are new to the profession. Nancy García, Fernando Grediaga, and José Manuel Guerrero Mendoza don't have any other credits to their names, either. But Jorge Antonio Guerrero has appeared in an episode each of Luis Miguel: La Serie and Narcos: Mexico, with a recurring role on Besieged.

And Marina de Tavira has worked extensively in film, TV, and on the stage. Most recently, she was in the movies This Is Not Berlin and Niebla de Culpa, though she also appeared in the TV show Falco. Those are only a few of her numerous credits, however.

Roma had a limited run in theaters starting in late November, and it may still be playing near you depending on where you live. But if you can't find somewhere to watch it on the big screen, then you can see Aparicio's debut performance on Netflix on Dec. 14.