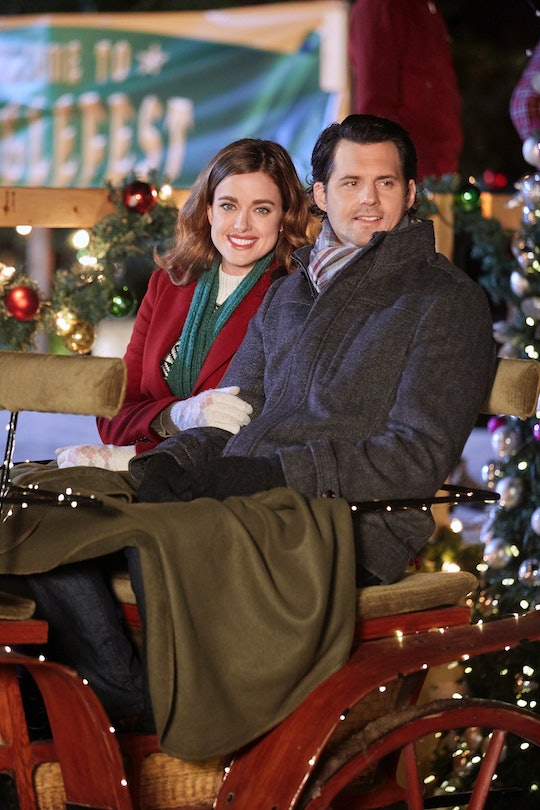 It’s always fun to find a familiar face in Hallmark’s holiday movies, and you might just catch a few in the network’s latest offering, Small Town Christmas. The movie tells a holiday story of rekindled love and second chances, and features a few actors you probably recognize. So, who is in the cast of Small Town Christmas? The film features two actors who you may have seen on Hallmark before.

Actors Ashley Newbrough and Kristoffer Polaha play the leading roles of Nell Philips and Emmett Turner in Small Town Christmas. You may recognize Newbrough from her other Hallmark movie, Love Under the Stars, or from her recurring roles on The CW’s drama series Privileged, or ABC’s 2015 series, Mistresses. Polaha has been in a number of Hallmark films over the years — including Dater’s Handbook with Meghan Markle — and has been featured in TV series like Castle, Backstrom, and Get Shorty. The film also features actress Bailey Skodje (The Crossing) as 9-year-old Marnie, actor Preston Vanderslice as Brad, and actress Debs Howard as Hayley.

Small Town Christmas tells the story of Nell, an author who is wrapping up a book tour for her best-selling novel called ‘Small Town Christmas.’ She based the book on her former co-worker Emmett’s hometown — which he would often describe to her when they would talk. Back in the day, when the two worked together, Nell and Emmett shared a connection, and he ended up asking her out on a date. But after he stood her up on that first date, Emmett quit his job and disappeared.

After all these years, fate brings Emmett and Nell face to face again. On the last leg of her tour, Nell is scheduled to stop at a small town bookstore, but she quickly learns that both the town and the bookstore are Emmett’s. On her way to the town, Nell meets a land developer named Brad, and the two decide to share a rental car to go into town. When Emmett sees Nell with Brad, he assumes they are together. When Nell hears Emmett tell his employee Hayley that Nell is just a “former acquaintance,” she’s reminded of the hurt she felt when he stood her up.

All this time, Nell assumed that Emmett ghosted her, but upon meeting his niece, Marnie, she finds out the truth. She learns is that Emmett only disappeared because his sister, Paige, was killed in a car accident on the night he stood her up. After her death, Emmett stepped in to take over her bookstore and become his niece’s sole guardian. Nell realizes that Emmett didn’t ghost her. In fact, she missed a letter he sent to her old office that explained his entire situation. After realizing what really happened all those years ago, Nell imagines that there might be a second chance for the two of them. But when Emmett agrees to Brad’s proposal to commercially revamp his quaint little town — including his bookstore — Nell starts wondering if his romantic qualities were just a fiction of her imagination.

Small Town Christmas’ story of love and forgiveness is the perfect recipe for a great holiday movie, and with its cast of familiar faces, it should be even more fun to watch.

More Like This
Netflix’s Holiday Movie Line-Up For 2022 Is Here!
33 A Charlie Brown Christmas Quotes To Fill You With Holiday Nostalgia
'Wednesday' Creators Say They're "Talking Amongst Ourselves About Season 2
'Workin' Moms' Has An Official Release Date For Its Final Season