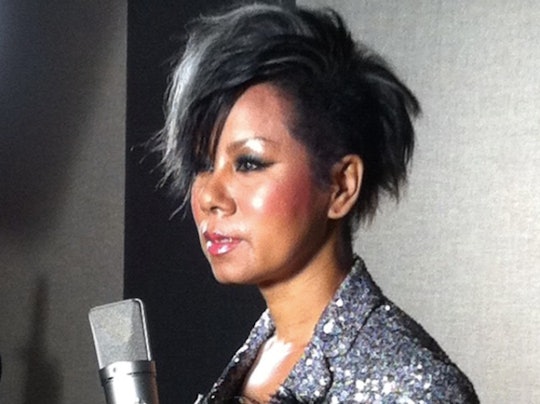 If you're either a true Korean music buff or an Olympic superfan who has been following the run-up to the Winter Games in PyeongChang, you might have heard of South Korean singer Insooni. For the rest of you, who is Insooni? The "Let Everyone Shine" singer will open the 2018 Winter Olympig Games with her songbird voice.

Insooni is a famous Korean pop and R&B singer, who has even toured in the United States. Her real name is Kim In-soon, and she is currently 60 years old. She made her music debut in 1978 as a member of the Hee Sisters, an '80's Korean pop band, and has released 19 albums throughout her career. She sang the Olympics Torch song, "Let Everyone Shine" at the torch relay kick-off ceremony, according to Olympic.org, and it was such a hit she will be singing the song again at the opening ceremony.

Many of the acts set to perform at the opening ceremony have been kept under wraps until the festivities actually begin, but there are a few other acts that have been revealed before the big day. The Sun reported that "Ha Hyun Woo, lead singer of South Korean indie rock band Guckkasten, and Ahn Ji-young, one half of female K-Pop duo Bolbbalgan4 (also known as Bolbbalgan Sachungi), are both set to perform." The opening ceremony is going to be an education in Korean music for us all!

Insooni has an interesting and somewhat unusual background; her mother is Korean, but her father is an African American serviceman who was stationed briefly in South Korea. She has spoken quite a bit about how difficult her childhood and school years were because of her mixed race background. In fact, The Korea Times explained that Insooni didn't graduate high school.

But that experience inspired her to help give back to the multicultural children by opening a school, called Hae Mil School, which means clear sky after the rain, said The Korea Times. The school opened in 2011 as a boarding school that offers mid-to-high school curriculums. Insooni told the publication, "I'd like to meet with those of different skin colors and help melt away their bitterness with the warmth of a mother or aunt. I hope to be a role model for them and help them lead their lives without making the same mistakes that I made."

The song Insooni will be singing at the opening ceremony in PyeongChang on Friday goes by the same name as the motto of the Olympics this winter. Insooni performed "Let Everyone Shine" at the kick off event for the torch relay 200 days before the opening ceremony. The torch was lit in Greece, and then traveled to South Korea, where it spent 101 days crisscrossing the country and visiting 17 cities, "shining a spotlight on the country’s culture, technological achievements and monuments," according to Olympic.org.

The torch will arrive into the stadium during the opening ceremony, itself a tribute to South Korea. Designed by Korean Young Se Kim, the torch is 700 millimeters long, which is the exact altitude of PyeongChang: 700 meters above sea level. "The white casing features five prongs, representing the star-shaped, Korean letter used in the logo, and also aims to [symbolize] five continents coming together," explained Design Week.

And that torch is not going to be extinguished, even by the strong winds and snow expected in PyeongChang: "When wind blows towards the flame, an air-tunnel is created which provides more oxygen which in turn will keep the flame lit throughout the Torch Relay. There is also a pentagon shaped hole in the bottom of the torch so that any water can drain to the bottom of the torch, ensuring that the flame continues to burn in rainy conditions," explained Olympic.org.

It's clear that the opening ceremony already has a vibe of resilience, from Insooni's inspiring history to the torch itself. You'll want to tune in and maybe even sing along!