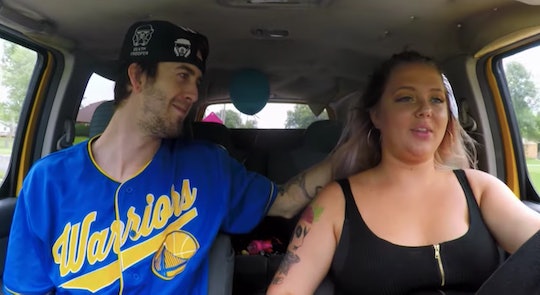 Jade Cline Shared Her Story On MTV Before 'Teen Mom 2'

Jade Cline is making the jump to Teen Mom 2 from Teen Mom: Young and Pregnant, which was where she made her reality TV debut. If you missed her first series, then you might find yourself wondering how she came to be a part of the franchise. She was 19 years old when she welcomed her daughter Kloie Austin with her boyfriend, but their relationship was full of ups and downs. Knowing who Jade Cline's boyfriend is on Teen Mom 2 helps to answer any questions about her pre-show past.

Technically, Jade isn't with Kloie's dad, Sean Austin, anymore. Their relationship was a complicated one, with several breakups and makeups, some of which were captured for Young and Pregnant. Though they were still together during the Young and Pregnant reunion show in December 2018, Us Weekly reported that they split officially in February 2019. There's a chance that audiences will see some of that play out on Teen Mom 2, but it depends on when filming commenced. Regardless, Sean may make an appearance or two because he's Kloie's dad and Jade's ex.

It doesn't seem like Jade is seeing anyone else at the moment. Her Instagram is full of photos of baby Kloie and her friends, but no special someone. It's possible Jade is dating but hasn't made anything Instagram official yet; it's equally possible that she's enjoying the single life, too.

Back in October 2018, Jade seemed positive about her relationship with Sean, which she discussed in an exclusive interview with Ok! Magazine. She said that they weren't "officially back together" at that time, but were working on repairing their friendship. They needed to build back their trust, though they did love and care about one another. Lack of communication was one of their problems, but they were "trying to take all the right steps" to work on things.

It seems a romantic relationship wasn't in the cards for Jade and Sean, because they ended things a few months later. It doesn't look like Jade commented on the end of their relationship aside from confirming it, but social media makes it seem like both she and Sean have a solid bond with Kloie. Their daughter dominates both of their social media feeds, so it looks like they might be co-parenting successfully even if they're not a couple.

In the lead-up to joining Teen Mom 2, Jade hasn't focused much on discussing boyfriends, past or present. Instead she appeared on Kailyn Lowry's podcast, Coffee Convos with Kail Lowry & Lindsie Chrisley, to talk about her difficult family situation. Her parents were both incarcerated during filming, which put a lot of strain on Jade. "They've been strung out for so long, they're like binge addicts, where they'll binge [on drugs] and then they'll be okay," Jade said. "And then it's like a fairytale for like a month and it's like I have my mom back, my mommy is back."

It sounds like Jade's time on Teen Mom 2 might have dealt more directly with her parents than her ex. But as Kloie's dad, Sean could always show up sometime this season, too.