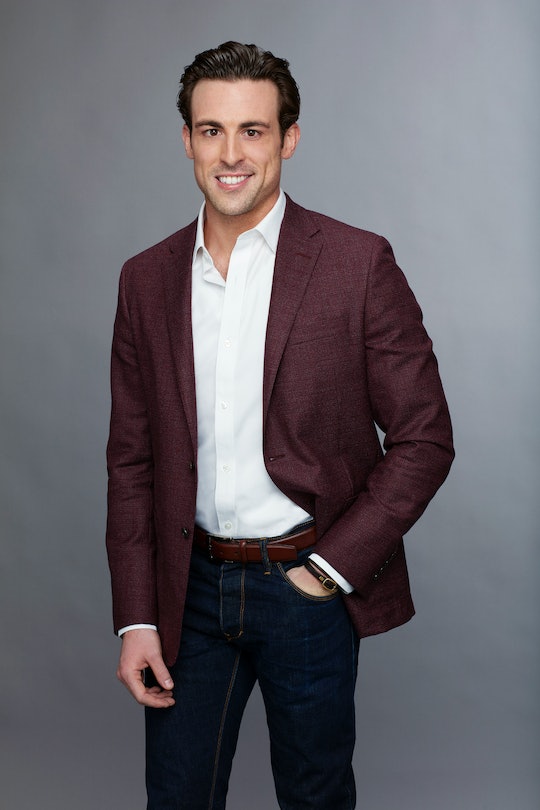 Who Is Jake & How Does He Know Becca On 'The Bachelorette'?

With all the news surrounding Bachelor Nation, it looks like the new season of The Bachelorette is gearing up to be an exciting one. This week, ABC announced the names and bios of the 28 hunks who will be vying for Becca Kufrin’s love, and it looks like there is the competition is pretty stiff. If you’re like me, you want to know all you can about every contestant, and considering one of the guys is from Becca’s hometown, you might be asking, who is Jake on The Bachelorette, and does he know her from back home?

Well, according to his ABC bio, Jake Enyeart is a 29-year-old marketing consultant from Minneapolis who is into adventures, motocross, and dirt bikes. Along with having jumped from the third highest bungee in the world, his bio says that he is a hopeless romantic who is into poetry and loves a nice dance. However, it’s Chris Harrison’s tip about Jake that has everyone in a tizzy. On Jake’s cast bio for E! News, Harrison noted:

"Jake and Becca have a past. Now they have different versions of that past."

Now what exactly that past entails is unclear, and, of course, the cast and crew aren’t going to offer any spoilers either. There are also no hints on his social media accounts, just pictures of him traveling, surfing, and biking on his Instagram account. So, whether they know each other as friends, or possibly dated in the past, it will be interesting to see how Becca reacts when she sees Jake stepping out of the limo for the first time. Depending on the past they shared, she’ll either be excited to see where it goes or disappointed because of any past emotional baggage. Either way, fans will have to wait and watch to find out.

I know a lot of fans have been feeling a little over protective of Becca, so aside from Jake, every guy on the show is going to be analyzed (and social media stalked) to pieces. After seeing Arie Luyendyk Jr. propose to her on The Bachelor last season, and then dump her for Lauren on camera, fans were almost as heartbroken as she was. Her tears and breakup anguish were totally relatable, so most fans feel emotionally invested in her finding love this season.

Luckily, there is already news of an engagement in the air. In an interview with People, Becca talked about how despite ending up with a broken engagement to Arie, she hadn’t lost hope to find her partner. She said that despite the craziness surrounding her, she felt that joining this season of The Bachelorette was “so worth it”, because she has finally found love. In a happy surprise for her fans, Becca confirmed to People that she is officially engaged and is super excited for fans to watch the new season and see how everything went down:

“It was the happiest moment of my life. And it feels so good to say it. I still pinch myself, like, did that all just happen? It’s been a whirlwind.”

After ugly crying with Becca at the end of The Bachelor, I’m so happy to hear that she finally found a guy that appreciates her, and won’t change his mind last minute. Now whether that guy is her hometown Jake, or any of the other mega hunks on the show this season, I’m just really glad that her story and this season of The Bachelorette is going to have a happy ending. So, get your popcorn, wine, and viewing party ready, because Season 14 of The Bachelorette is set to debut with a two-hour premiere special on Monday, May 28 at 8 p.m. EST on ABC.