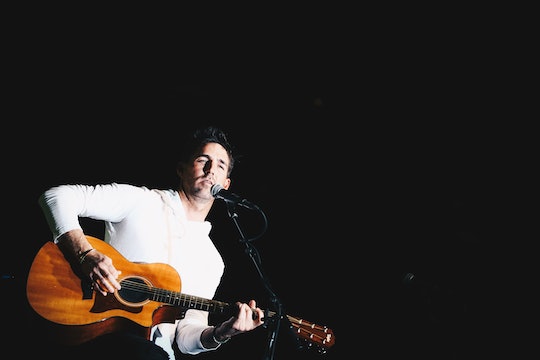 Every season on The Bachelorette features at least a few performances by little known musical guests, and Hannah's season is no different — thought the artists this year appear to have a slightly bigger influence. First it was Lukas Graham on her date with Connor S. Now you may be wondering: who is Jake Owen? The Bachelorette performer's love song will make your heart melt.

Jake Owen is a country music singer and songwriter who released his debut album, Startin' With Me in 2006. The album had three singles that all reached top 20 on the Billboard Hot Country Songs chart: "Yee Haw," "Startin' with Me," and "Something About a Woman". Still doesn't ring a bell? How about his first number one hit on the country charts — "Barefoot Blue Jean Night?" Owen is one busy guy.

Before making it big, he toured as an opening act for some of your country faves such as Kenny Chesney, Little Big Town, Keith Urban, Sugarland, Jason Aldean, and Brad Paisley. Aside from all that, the married father just welcomed his second daughter, Paris Hartley, with girlfriend Erica Hartlein (their first child together).

According to the Newport Daily News, Owen performed in Newport, Rhode Island for The Bachelorette and her date, Tyler C., inside the Jane Pickens Theater & Event Center. The news outlet reported "the marquee on the theater on Washington Square read 'Hannah and Tyler'." While there are a lot of great songs to choose from, Owen has a few notable love songs that are perfect for a Bachelorette looking for a forever partner, such as "Made For You."

After all of this success you might be surprised to learn that Own wasn't originally aiming to be a musician. As a matter of fact, he only made a career in music after a wakeboarding accident left him seriously injured. Before that he had intended to be a pro golfer but his reconstructive surgery changed all that. So, he did what anyone would do — picked up a guitar, and the rest was history. Hannah and Tyler C. may not know all that backstory, but now that you do, you can savor the performance that much more.

Performing on any episode of the 17-year franchise, you'll likely get an onslaught of new fans that otherwise wouldn't have noticed. It's a great career move, and for Hannah, a good way to get close to a contestant. Since the lucky chap this time around is a home building contractor who likes to dance, this is a winning situation for all involved. It may not matter how good of a dancer Tyler C. is, but at least the background music will be spot on.

So who knows? Maybe Hannah and Tyler C. will find their magic during Owen's song and end up engaged. In previous seasons, some of the bigger acts that have appeared on The Bachelor and The Bachelorette include Barenaked Ladies, Vanessa Williams, Chicago, Robin Thicke, Train, Dolly Parton, and more. I know, right? How do I sign up for one of these little outings?