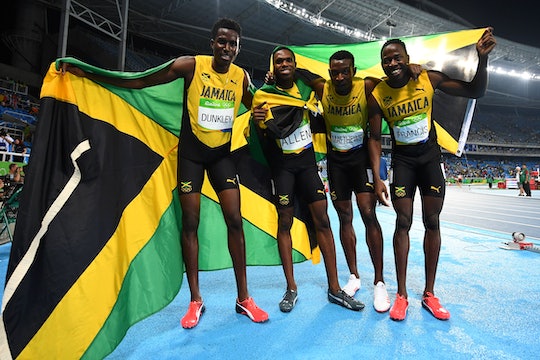 Who Is Jamaica’s Flag Bearer At The Closing Ceremony? It's A Surprising Choice

The 2016 Summer Olympics have come to a close, as athletes fill the Maracanã Stadium in Rio de Janeiro, Brazil. After the all gold medals and world records, the closing ceremony is one final celebration for athletes from around the globe — and whether they've won a medal or not, being a Olympic flag bearer is an honor. Who is Jamaica's flag bearer at the closing ceremony? Fans were hopeful it would be nine-time gold medal winner Usain Bolt, as he retires from the sport after these games, but surprisingly, another Jamaican Olympian carried the flag for the island nation.

Jamaican track and field athlete Javon Francis was the flag bearer for the nation at Sunday's closing ceremony. The 21-year-old sprinter earned a silver medal for his home country in the men's 4x400 meter relay on Saturday, along with his four other teammates in the final heat. Rio 2016 was Francis' first Olympic games, and he can proudly come home with two honors: a silver medal and the title of one of Jamaica's flag bearers.

For the opening ceremony on Friday, Aug. 5, Shelly-Ann Fraser-Pryce was selected as the Jamaican flag bearer as their country made its Olympic entrance into the stadium.

While Olympic fans may have missed Usain Bolt at the closing ceremony, it's a bookend moment for this year's Olympics, as Bolt was missing from the Rio 2016 opening ceremony as well. But he hasn't completely missed out on the unique flag bearing honor: Bolt was Jamaica's flag bearer at the London Games in 2012, during the Olympic opening ceremony.

Rio 2016 has been proven a banner competition for the Jamaican team, as its athletes will bring home 11 medals — six gold, three silver, and two bronze — competing solely in track and field events. Regardless of who carried Jamaica's flag during the Rio 2016 closing ceremony, the Jamaican Olympic team has plenty to be proud of this year.