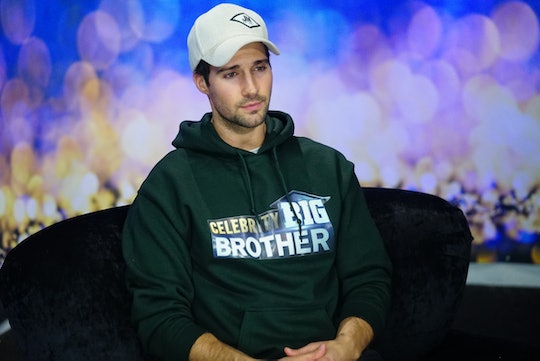 Thankfully, it appears James is currently single. He hasn't been linked to any other celebs since rumors swirled about him dating his Dancing with the Stars partner, Peta Murgatroyd, back in 2014. Both he and Peta denied the rumors and Peta has since married her fellow Dancing With the Stars pro, Maksim Chmerkovskiy.

So unless James is keeping his relationship very secret, it seems James is single to mingle, which means you can totally keep hope alive that one day he'll meet and fall in love with you. For now though you'll just have to settle for watching James in the Big Brother house. Thankfully, he has no problem showing off his abs while he's cooped up there, so there's plenty to see.

James almost ended up going home during the last eviction when he was put up next to Shannon during Ariadna's Head-of-Household. However, he was able to win the Power of Veto and took himself off the block, thus insuring that Shannon would be evicted instead of him.

Now Omarosa is running the house as HOH and she's secured a new alliance with James, Metta, and Mark. So while James just lost his one ally in the house (Shannon) it seems he's found a new one, though how long this will actually last remains to be seen. Still, for now James is safe and sitting pretty. Omarosa decided to try and break up the other alliance and nominated Ross and Brandi for eviction this week. However, the Power of Veto is still up for grabs, which means either of them could be pulled off and Omarosa could back door someone.

Even so, Omarosa wouldn't betray the alliance she just built by turning on James and nominating him as a replacement. Instead, she'd most likely put up someone else on the other side of the house if Ross or Brandi were able to pull themselves off the block. Therefore, Jame should be completely safe during Monday night's eviction. That being said, it'd still be in his best interest to try and win the next HOH. At the end of the day, the only person you can really trust in the Big Brother house is yourself, and the only way to make sure you're truly safe is to be HOH.

Plus, with Omarosa out of the running for next HOH and the other side of the house probably wanting to get revenge after one of their own most likely gets evicted, it'll really be up to James, Mark, and Metta to protect their alliance. As fun as Metta is to watch, he's pretty much made it clear he's not really there to win, he's just there to have a good time, thus making him unreliable. Mark is also a bit of a wildcard, so James is really their best bet to win HOH.

Hopefully, he'll be able to pull out a win and keep himself and his alliance safe. His fans would surely like him to stay in the house as long as possible, if for no other reason than to get to see him walk around shirtless.

You can see what's in store for James and the other houseguests when Celebrity Big Brother continues on Monday, Feb. 19 at 8 p.m. EST on CBS.