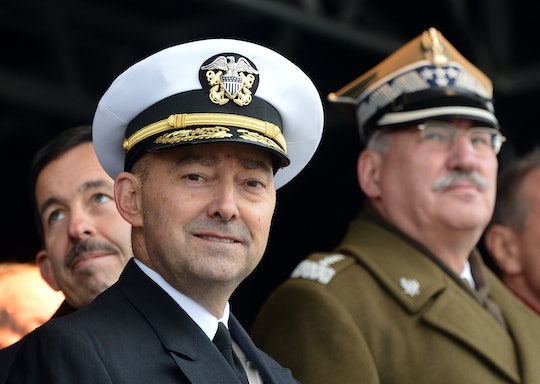 Who Is James Stavridis? The Navy Admiral Might Be On Hillary Clinton's VP Shortlist

We are getting super close to the general election and it's time to start seriously speculating about who will be on the Democratic and Republican tickets as vice presidents. Nothing is official yet, of course. But it's worth asking who James Stavridis is, as rumor has it that he might be on Hillary Clinton's short list as a presumptive vice to her presumptive Democratic nomination.

Stavridis is a retired Navy Admiral and currently the dean of the Fletcher School of Law and Diplomacy at Tufts University, so he obviously knows what he's talking about when it comes to policy. He would be a very interesting pick for the Clinton campaign — he's an academic, knows about foreign policy, and a bit of an outsider. Those are all good things, since Clinton needs someone to woo voters as much as she needs a partner who can hold their own in cabinet meetings.

He also has a little scandal under his belt, according to The New York Times. Once upon a time he was investigated for using "a military aircraft to fly with his wife to an exclusive party in Burgundy, France with winemakers." Because anyone Hillary Clinton campaigns with has to have at least one scandal under their belt to be taken seriously. I jest (but seriously, it's the perfect mini-scandal).

Stavridis was eventually cleared of misconduct and has been described as a "person of great ability and integrity, and an exceptional leader. He has the talents, experience, judgment and temperament to serve the American people at the highest levels of our government," a former under secretary of the Department of Defense, told Reuters.

No one from the Clinton campaign or from Stavridis' staff is confirming or denying that he has been vetted for the vice presidency. It's almost like trying to figure out who the next James Bond will be. (Although James Bond is probably much more interesting.)

However, Stavridis has already been semi-plagiarized by the Clinton campaign, so they would do well to put him on staff. According to Reuters, in a 2012 TED talk, he said, "My thesis for us today is, instead of building walls to create security, we need to build bridges."

Hillary has been using that line for months during the primary to fight presumptive Republican nominee Donald Trump, who has suggested building a wall to ward off Mexican immigrants from entering the country. Coincidence or not?

There are many viable candidates for the Democratic vice president. Seeing that Clinton has already used some of the retired officer's lines for her policy speeches makes Stavridis a good bet for vice president. But seeing how this election has gone so far, anything is possible.