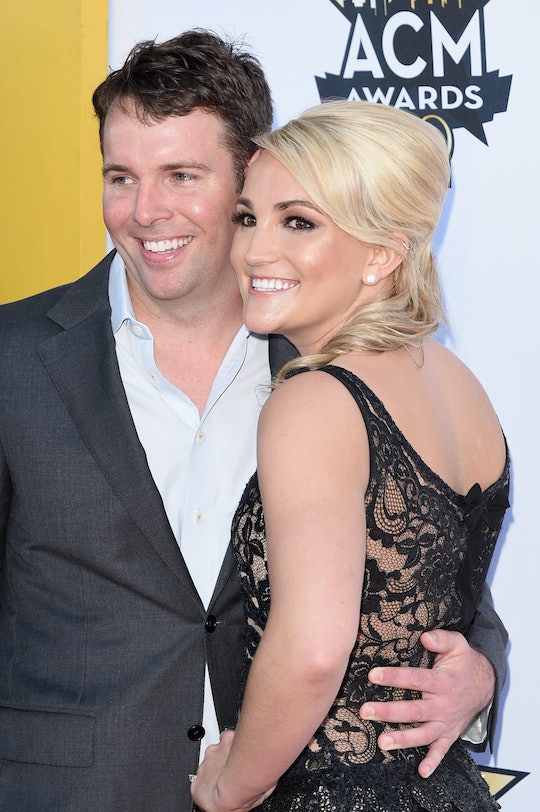 Jamie Lynn Spears — the younger sister of Britney Spears and former Zoey 101 star on Nickelodeon — was thrust into the spotlight back in 2007 when she became pregnant at age 16. After she gave birth to her daughter, Maddie, the actress laid low for several years until making her return as a country singer. These days, Jamie Lynn continues to follow her passion in the country music industry. We also learned recently that she is expecting her second child — and first with her husband, Jamie Watson. But who is Jamie Watson? As it turns out, Jamie Lynn Spears' husband is just a regular guy.

On Dec. 24, the 26-year-old star announced that she and Watson will welcome their first child together in 2018. The expectant mama took to Instagram to share the baby news, according to E! News. “Looks like we are starting off 2018 with another big milestone…sooo happy to announce that Maddie is FINALLY going to be a big sister,” Spears wrote alongside a family photo. “2017 was filled with some of the biggest challenges of my life, as well as some of the biggest blessings, so I made a choice to lay low this year to focus on truly becoming my best self as a person and as an artist.” She continued:

During that time, I continued working on my music and telling my story, which has created some of my most honest work and I [CAN’T] wait to share that with you all very soon. 2018 is going to be filled with many milestones both personally and professionally. I appreciate each of you for your patience and support through it­ all. 2018 has a lot coming.

Naturally, fans have a renewed interest in Spears and her growing family, including her husband, Watson. The duo met through a mutual friend and first began dating in 2010 — the same year Spears had split from Maddie's father, Casey Aldrige, according to People. They dated on and off for five years before becoming engaged in 2013, according to E! News, and exchanged vows on March 14, 2014.

At 35, Watson is about nine years older than his wife. And apparently, he had no idea Spears was famous — nor did he know she was the little sister of pop star Britney Spears — when the two first met, according to Us Weekly.

“I’m just a normal guy with a normal job,” he said during a TLC special, according the publication. “I did not know about the family. I didn’t know she had a TV show. I didn’t know anything about her.“

Yeah, I'm going to go out on a limb and assume that Watson wouldn't have been that interested in Zoey 101, anyway. Besides, he was probably too busy owning/running his business, Advanced Media Partners. Us Weekly reported that it's a communication service that "provides high-end electronics and high-definition television sets to corporations."

After Maddie's widely-reported accident in February — during which the then-8-year-old accidentally drove an ATV into a pond and was submerged underwater for several minutes before first responders could pull her out — People reported the family rallied together to support Maddie in the hospital. Jamie Lynn, Maddie's father, Casey Aldrige, and Watson all "sat around her bed, talked to her, held hands and prayed,” a friend of Aldridge told People.

"Thank you to everyone for the prayers. Maddie is doing better and better. Thank y'all so much," the stepfather posted on Instagram at the time.

When I first saw Spears' husband's name, the initial thought that popped into my head was, "It must be weird to be married to someone who has the same first name as you." (I thought the same thing back in the day, when Taylor Swift and Taylor Lautner were a thing.) My next thought was, "Whoa, he seems so normal." He's not a celebrity. He seems like an all-around nice guy who obviously didn't seek out Spears because of her fame. And it's pretty clear that Watson adores Maddie. And I have a feeling Spears' husband is going to be a great father to their new baby, too.