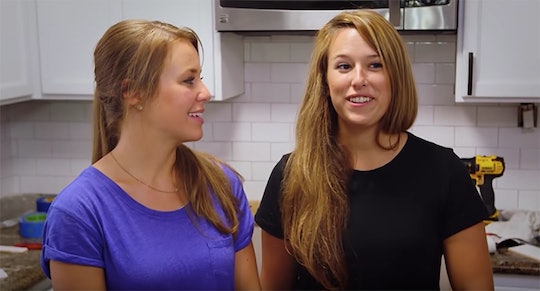 Here's Why 'Counting On' Fans Are Curious About Jana Duggar's BFF

Jinger Duggar's birth special hit the internet on Monday, just 18 days after she welcomed her daughter, Felicity, into the world. The special revealed a lot of interesting details, to say the least, like the fact that Jinger requested an epidural during labor. But one of the especially curious things fans noticed was the presence of Jana Duggar's best friend, 33-year-old Laura DeMasie. In the special, DeMasie is seen hanging out with Jana outside of the delivery room, and some fans wondered why she'd attend such a private moment. As it turns out, however, DeMasie is often present at special Duggar events. From the family's weddings to visits to Jinger and Jeremy Vuolo's home in Laredo, Texas, DeMasie is clearly very close to the Duggars.

Unlike her sisters before her, Jinger didn't invite a bunch of family members to her delivery. In fact, Jessa Duggar and her husband, Ben Seewald, flew to San Antonio, Texas to surprise Jinger and Vuolo since they weren't technically invited to the event. Translation: Jinger didn't plan for a big crowd in her hospital room. But in the end, a total of nine people were there: grandparents Charles and Diana Vuolo, Michelle Duggar, Jana, Jessa, Seewald, Spurgeon, Henry, and DeMasie.

Considering the group consisted of Jinger's closest family members (Jessa is her best friend, remember?), it's reasonable to wonder why DeMasie snagged an invite to the delivery. "Like really... who is she? Why is she around? Why is she STILL around!?" one fan commented on Reddit. "Why did she go to Jinger’s birth? ... "

Although DeMasie's presence might be confusing to some fans, it shouldn't be to longtime viewers of Counting On. DeMasie has appeared on numerous episodes before, including one about Jinger and Vuolo's home renovations. Along with some of Jinger's siblings, DeMasie helped whip the couple's new house into shape.

DeMasie was spotted again when she accompanied Jana to Laredo just a few weeks before Jinger's delivery. A weekend visit from family," Vuolo captioned a snap featuring himself, Jana, Jessa, Seewald, and DeMasie, according to Instagram. It also looks like Jana's bestie also attended Jinger's sex reveal party, which is interesting.

Although DeMasie is exclusively referred to as Jana's friend, she might have another role at chateau Duggar. DeMasie reportedly planned the weddings of Austin Forsyth and Joy-Anna Duggar and Joseph Duggar and Kendra Caldwell, according to In Touch Weekly.

As for DeMasie's professional background, she works for Embassy Media, the online media library for the Institute in Basic Life Principles (IBLP), according to In Touch Weekly. If you haven't heard of the IBLP, it's "dedicated to giving individuals, families, churches, schools, communities, governments, and businesses clear instruction and training on how to find success by following God’s principles found in Scripture," according to its website. The Duggars are known supporters of IBLP's teachings, as Talking Points Memo reported.

Although it's not exactly clear what DeMasie does for Embassy Media, it might have something to do with graphic design. "A big thanks to Christine Ku and Laura DeMasie for their excellent work on the new design and logo!" an announcement about Embassy Media's redesign read, according to Abundant Designs.

Whether you support DeMasie's presence at Jinger's delivery or not, most people can agree it's nice to see Jana has such a great friend by her side. It's clear the two have a lot in common (creative projects, IBLP, close in age), and many fans can relate to their sweet friendship. But the best part about this bond is DeMasie's close relationship to the Duggar family and Jana's siblings. It's always a plus when your bestie fits in perfectly with your relatives, right? And on that note, here's to many more years of Jana and DeMasie's friendship.