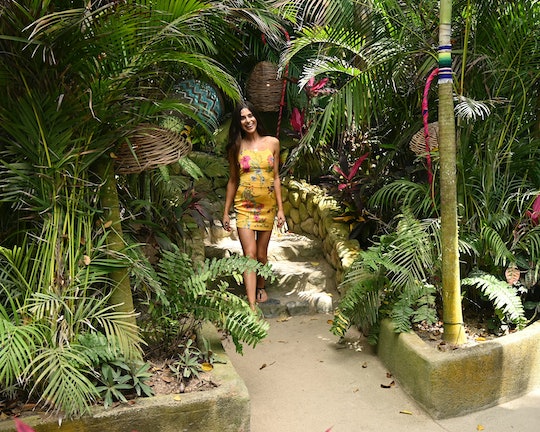 Nobody Remembers Who Jane Is On 'Bachelor In Paradise'

Every season of Bachelor in Paradise contains at least one curiously unfamiliar face, and this summer, that face belongs to Jane, who comes to Bachelor in Paradise from Colton's season of The Bachelor. She left the mansion on night one, so viewers didn't get to know her very well, which unfortunately opened the door for an unsavory intro package wherein she consumed an ill-advised volume of hot sauce.

When Jane joined Colton's season, she went by Adrianne, though her Bachelor bio still lists "Jane" in quotes. I guess she was hoping a rebrand would make her more memorable, and, given her early spark with Clay, that strategy might have worked? Jane is a 27-year-old social worker from West Hollywood who works with senior populations at an elderly day care center. She also has a dog named Bella, whom you may remember from her limo entrance on Colton's season; she presented him with a photoshopped image of Bella and his dog Sniper hanging out together, which was actually a really cute first impression. Alas, she got cut at the end of the first cocktail party. So viewers had to watch her brush her teeth with hot sauce on Bachelor in Paradise in a vain attempt to make a name for herself.

Hopefully, Jane's connection with Clay means she won't have to base her whole personality around Tapatio for much more of this season.

"Clay is like this teddy bear who just walks in and you're like, 'Hold me I'm little!'" she gushed in a confessional interview on BiP. "He's just so big and strong, you almost want to purposely drown so he can come and save you. I will put myself in danger, just please come and rescue me."

And Jane isn't shy either. She made a beeline for Clay right away and introduced herself by name, to which he, without missing a beat, responded, "I'm Tarzan." (Wills' reaction shot was legendary. Dude just walked away.) Jane and Clay went on to compliment each other's eyebrows (um?) so I guess they're getting the ~quirky~ couple edit. But drama may loom on the horizon.

Right after Clay and Jane were spotted flirting, Annaliese promptly began spilling tea to the rest of the group. Clay had previously dated Bachelor alum Angela (which he freely admitted at the top of his intro package), with whom Annaliese was really good friends. According to her, the breakup was just a little too close to the BiP kick off for comfort. She claimed Clay had told Angela that he couldn't imagine looking at another woman when they broke up and yet, here he was in Paradise, looking to get engaged. Interesting. Definitely good information to file away, but also, it's worth taking with a grain of salt. Annaliese was one of last season's more, shall we say, sensitive contestants, and she was pretty notorious for having a lot of feelings. It's possible she's playing up this would-be drama just a touch.

The Bachelor in Paradise Season 6 premiere ended without a rose ceremony, so it remains to be seen if Jane can break her streak and outlast the first elimination.